Happy Monday!
As you can see I'm back to my usual posting schedule. I said last week that things would go back to normal slowly.
Today I welcome author Amber Skye Forbes.  Read the great interview to discover more about her and her book :) 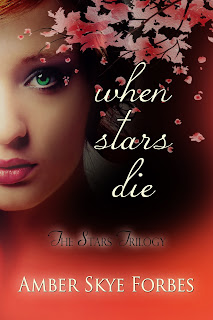 Amelia Gareth's brother is a witch and the only way to save her family from the taint in his blood is to become a professed nun at Cathedral Reims. However, in order to become professed, she must endure trials that all nuns must face.

Surviving these trials is not easy, especially for Amelia, who is being stalked by shadowy beings only she can see. They're searching for people they can physically touch, because only those they can touch can see them. Amelia soon learns why she is being stalked when she accidentally harms her best friend with fire during the third trial. Fire is a witch's signature. The shadows are after witches.

Now Amelia must decide what to do: should she continue on her path to profession knowing there is no redemption, or should she give up on her dream and turn away from Cathedral Reims in order to stop the shadows who plan to destroy everything she loves?


First of all let me tell you that I love the name and the cover for your book. When Stars Die sounds like a great YA paranormal romance.

Ruty: How would you summarize your book?
Amber:  Amelia Gareth discovers that her brother is a witch. She then thinks the only way to redeem her family from this taint is to join a convent and become a nun. She soon learns that redemption is impossible, but she still wants to fight for a place in Paradise, which is where the dangerously attractive priest, Oliver Cromwell, comes in.

Ruty: What inspired you to write this book?
Amber: There wasn’t any one thing that inspired it. I started this book at fifteen and just knew I wanted to write about witches and convents and nuns and why some are witches and why others aren’t. So I came up with all these scenarios that eventually evolved into When Stars Die as it is today. The concept is more mature now than when I began it, but much of what I wanted to include is still the same.

Ruty: How did you come up with the name?
Amber: There is this part in the book where Amelia is looking up at the stars and thinking how when stars die, they leave a lasting impact. She likes to think people leave that same impact, and so she is determined to do so. Not only does she want to redeem her family, but she knows she wants to do something with her life that is beyond herself. She essentially wants to be like the stars, so that way when she dies, she will have done something grand beforehand.

Ruty: How long took you to write the book and get it published?
Amber: It took me a year to write and a year to revise because it was the first book I knew that I wanted to publish. As for getting it published, it didn’t take me long at all to find a publisher. I knew I wanted the small press route, I found one whose ideals I liked, and they accepted me. Once I read over the contract, I knew I would be a good fit for them. I just got lucky that I found a publisher who was into my genre.

Ruty: Did you have to do any research to write your book?
Amber: I had to research the Victorian era. I did that by reading fiction books to see how these authors handled the 19th century, and I also did internet research. Some of my reviewers have actually been surprised about some of the stuff that existed back then. Yes, electricity existed in the late 19th century, and people called hansom cabs, which are horse-drawn carriages instead of our modern day taxi cabs, cabs. They even had omnibuses, which were drawn by horses.

Ruty: Are you working on book 2? When it will be out?
Amber: I am working on the second book, but as for when it’ll be out, hopefully by next year. I’m still re-writing it, and then I’ll need to do a ton of revising before sending it off to my publisher.

Ruty: I know that writing and having a regular job can’t be easy. How you manage to work, write and go to college at the same time?
Amber: I just write when I can. I’m not working too many hours, and I’m only taking three classes this semester—all in an attempt to keep my health together—so finding time to write hasn’t been too difficult. It’s slower now, but it’s still getting done.

RELEASE DATE:
When Stars Die is slated to be released in October of 2013 by AEC Stellar Publishing.
Publicado por RuthB en 9:35 AM