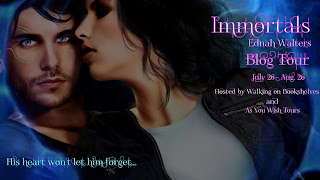 Welcome to the Immortals blog tour. Presented by: Walking on Bookshelves & As You Wish Tours.

As you know I loved the first book in the Runes series and as I expected, the sequel is AMAZING!
Ednah made a great job with this book.

Keep reading to find out more about the book, the author and also we have an incredible giveaway.
Thanks to the host and Ednah for my e-ARC. 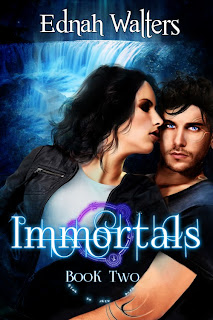 Nothing can stop Raine Cooper when she wants something…
Raine finally knows that her gorgeous neighbor, Torin St. James, is a legend straight out of Norse mythology, and that her feelings for him are strong. Torin is crazy about Raine too, breaking the one rule he lives by: Never fall for a mortal. The problem is he no longer remembers her, his memories erased by Norns—Norse destiny deities—to punish her for defying them.
She will make Torin forget his one rule a second time and fall in love with her all over again.
But she quickly learns that well-laid plans do not work when dealing with deities and supernatural beings. Desperate, Raine makes choices that could not only tear her and Torin further apart, but lead to the destruction of everything and everyone she loves.

Raine is now part of the Valkyries world, what is more, she is training to be one. Trying to put her life back together after a tragedy she tried to prevent, her father coming back and Torin forgetting all about her is not an easy task.

This sequel picks up a few weeks after the last book and goes right to the action. A faster book with more twists and adrenaline than the first one, Immortals has a mature tone and deals with the feelings and emotion in an exceptional way.

The introduction of new characters like Lavania, the unveiling of secrets (like Erik’s real identity) and the Three Norns messing with Raine’s head, make this book impossible to put down.
One of the greatest things of the book is the relationship between Raine and Torin. As the first time, the tension between them is palpable, however, he has no idea of what happened in the past. It’s really engaging to read about how they work things out. Raine has a hard time seeing him and remembering the passion and love but not being able to go right to him because his memories were erased. The romance is much mature this time which is great.

This book also present a darker tone, there is an evil out there trying to ruin the town and some of the characters’ lives. There’s a violence that makes the story more powerful, real and truly makes it a better book.

Our leading lady Raine is no longer the shy girl she used to be. Now that her life and others’ is in danger she has a different perspective about life and love. We get to see more of the other characters, each one evolves at its own speed but they all look real.

As usual Ednah writing style is engaging and easy to follow. Again she achieves to transmit the feelings and emotions, bringing to life complete characters through words.

Overall, Immortals is a fantastic sequel with more romance, action and loose ends for next time.


*****
AUTHOR BIO.
EDNAH WALTERS grew up reading Nancy Drew and the Hardy Boys and dreaming of one day writing her own stories. She is a stay-at-home mother of five humans and two American shorthair cats (one of which has ADHD) and a husband. When she is not writing, she’s at the gym doing Zumba or doing things with her family, reading, traveling or online chatting with fans.

Ednah is the author of The Guardian Legacy series, a YA fantasy series about children of the fallen angels, who fight demons and protect mankind. AWAKENED, the prequel was released by Pill Hill Press in September 2010 with rave reviews. BETRAYED, book one in the series was released by her new publisher Spencer Hill Press in June 2012 and HUNTED, the third installment, will be released April 2013. She’s working on the next book in the series, FORGOTTEN. Visit her at www.ednahwalters.com

Ednah also writes YA paranormal romance. RUNES is the first book in her new series. IMMORTALS is book 2. She is presently working on book 3, GRIMNIRS (Release date TBA). Read more about this series and the world she's created here www.runestheseries.com

Under the pseudonym E. B. Walters, Ednah writes contemporary romance. SLOW BURN, the first contemporary romance with suspense, was released in April 2011. It is the first book in the Fitzgerald family series. Since then she has published four more books in this series. She's presently working on book six. You can visit her online at or www.ebwalters.com.