Time for review of book 2. I posted my review for book one last Monday :) I have to say that I enjoyed The Hornet Slayer much more than the previous one.
There is a book three planned and I'm sure I will be reading it.
Thanks to the author for sending me the copies of both books.

The Hornet Slayer
by F.J. Wilson 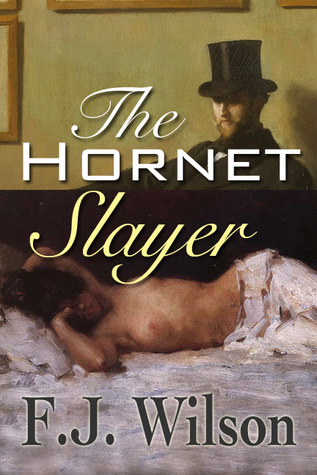 Will a forbidden love on the fringes of society stand the test of time?
“The music was working its magic in the hot afternoon and she moved to the slow beat of its wonderfully flowing rhythm. She could feel the insane heat in his eyes without turning around. He stood, cupped her breasts and gently ran his hands over and under the swell of them, weighing them in his hands, surprised at the heaviness. She laid her head back against him and her hair fell across his chest. Drew’s erection was almost painful. Oh dear sweet Jesus, so this was why Adam was thrown out of Eden, what a ride that must’ve been”.
Drew Down, an accomplished son of a rich Kentucky planter, is destined to be the richest man in America; however, his life-long love for Daisy, a young, beautiful slave on his grandparent’s plantation, threatens to unravel their world and destroy their families. In this sweeping saga beginning with his lessons with the beautiful courtesan Celeste in the house of her grandmother, Celestine, the Civil War, the collapse of King Cotton, and exiles to Europe, two lovers struggle to be true to their hearts despite society’s disapproval.

The Hornet Slayer is book two in the series written by F.J. Wilson and let me tell you I liked it more than book one. Despite being a book that follows the line of a historical romance set in New Orleans, the characters on this installment are way better and interesting.

Drew, the grandson of Andrew a nice character we met on the first book, is sent to New Orleans to learn how to treat a woman under the care of Celeste (who is Celestine granddaughter). There, he discovers passion and a new life but the most important thing is that he finally realizes how much he loves his best childhood friend Daisy.

There are so many good things about this book. I enjoyed the twists, the coming and going, how well the prejudices, the forbidden love and the odd friendships are portrayed. It has a similar writing style to the previous book and it has the same rhythm issues, sometimes it goes really fast and others times is slower.

Drew and Daisy are two likeable characters who made a lot of mistakes but they are enjoyable and funny. There are some secondary characters who sometime steal the spotlight because they have great scenes and roles in the story. It’s good to see the characters grow older and discover latter in the story how they ended up where they are.

Also, during the first half Celeste has a really important role but in the second part of the book she has less relevance. It’s not something bad it’s just curious, I’d imagined she will be the leading lady but I understand why the story goes at it does.

There is also a lot of passion and hot scenes which have a more balanced tone than the first time. There is an equilibrium in the intensity and action which is good.

Despite some formatting errors (that maybe only my edition has) I enjoyed this book. Like I said this series is recommendable for those who like historical romance.
Publicado por RuthB en 12:23 PM