Happy Monday!
Welcome to a new week, today I have a review for the first book on a series by F.J. Wilson. I have to thank the author for sending me copies of the first two. I like the second more but you will have to wait for my review.

Celestine: The House on rue du Maine
by F.J. Wilson 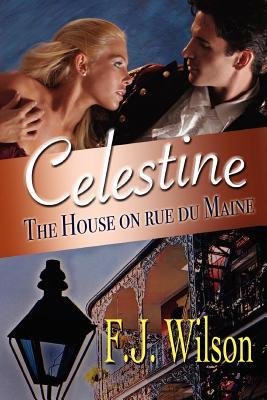 In 1795 New Orleans, the Spanish controlled city struggles to rebuild after two devastating fires, and a young teenage girl is just as determined to leave her past behind and start anew.
Celestine, the daughter of a Mississippi River prostitute spends most of her time hating herself, her life and the dirty men who rut with her mama. When she turns thirteen and her mama informs her she’ll be servicing the very men she hates and fears, she has no other option but to run to the good nuns of the Ursulines Convent where for the first time she encounters kindness and a different kind of life.
After meeting the dashing ship captain Maurice Dubois, a man with his own past demons to reckon with, Celestine allows herself to be truly loved for the first time. But when a shocking turn of events leaves her once again with nothing more than her own wits to survive, Celestine begins to realize the power her intoxicating beauty gives her over men including the debonair and infamous pirate Jean Lafitte.
It’s this very power that Celestine learns to capitalize on to begin a new career...not as the common riverfront lady of the night her mother had been...but as the most sought after courtesan in all of New Orleans.

Celestine is a good historical romance situated in the eighteen century New Orleands. In a time where slavery was real and pirates too, a woman will do everything she thinks right for her and her family.

After running away from an awful childhood, Celestine grows up to be a decent and respectful young woman under the care of the Ursulines Nuns. The Convent has been her home since she was a runaway teenager and now she needs to decide what to do, either she marries a suitable man or she joins the convent. Her friend and life have some surprises for Celestine because after meeting Captain Maurice Dubois her life will not be the same.

Celestine’s story is quite a ride, full of unexpected situations, misunderstandings and love. The Captain falls in love with her from the moment he sees her and will have to gain her trust in order to marry her. Her past will confuse her and will cause a lot of confusion and misinterpretation.

This book presents a very voluble and sort of funny woman. Celestine makes the strangest of choices and has a tendency to see the worst in people. She is the living proof of always ask before you assume anything. I honestly did not like her very much but only because is so easy to be mad at her and her attitude. It takes her too much time to figure out what she needs to do for a living and often does not see what is in front of her.

For me the inclusion of pirate Jean Lafitte to the story is the best part. He is a great character, both selfish and caring at the same time. He really makes the story better, not only is a pirate he is also a main reason of why Celestine becomes who she is at the end.

It has a smooth written style, easy to read with a nice but sometimes slow rhythm. The romance and love scenes are not always the same, there are scenes full of details and a sense of tension and other that goes fast.

Overall, is a good read if you like historical romance.
Publicado por RuthB en 1:51 PM