Hope you all are having a wonderful Tuesday :)
It's time for a new review, this time I have to thank the author for sending me a copy of his book.

Harold the High Knight and Princess Megan
by Micheal Andrisano 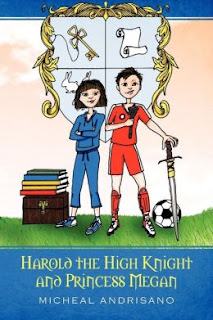 A Beguiling Adventure in the World of Fairy...
Things just haven't been the same for Harold and Megan since their father mysteriously disappeared. But one night, a ghostly visitor tells Harold that his father is being held captive by a mad gnome named Gagledormius, somewhere in Ireland.
To find the lair of the mad gnome, Harold must solve a riddle. Harold loses all hope; he hates puzzles of all kinds. But a magical box that belonged to his father may hold a clue. When Harold relates his strange tale to his family, his mother refuses to believe it, and thinks Harold is making up stories to console him for the loss of his father.
But Megan knows there's more to it. Against their mother's wishes, Harold and Megan turn to their classmates for help. But when nobody can solve the riddle, they must convince their mother that their father is in danger, and that they must travel to Ireland to seek the help of his relatives and friends.
Little do they know what awaits them on the Emerald Isle: the mad gnome is the enemy of fairy folk, and they receive some special help from the Mayor of the Leprechauns, as well as from a surprise visitor who appears when hope is lost.
Will Harold and Megan find their father, and can they rescue him before time runs out? Follow them across the ocean and into a magical world as they explore the realm of enchantment.

Harold the High Knight and Princess Megan is a juvenile story full of fantasy and sweet lessons. A brother and a sister, whose father has gone missing without any goodbyes or clues about his whereabouts, join forces to save him from an evil gnome.

The book presents two nice characters, a thirteen-year-old boy and a girl two years younger. They’re both unique and quite interesting. Harold seems a bit older at times but maybe because his father went away he has taken the role of the man of the house. His sister is really funny and likeable. Megan is actually really smart and despite her age she has a very relevant role in the story.

The story includes a lot of Irish folklore which is great because it brings magic and fantasy to life. I really enjoy all the mystery surrounding the gnomes, leprechauns, fairies because everything is well explained and used with great purpose.

The plot is good- it presents quite a solid world where fantasy seems possible and real. However, it’s not fully engaging and it loses rhythm at times because there are parts that could have been deleted to make the story move faster. And there were others of which I expect more and little was said.

It has sweet messages such as the importance of our families, working together and supporting each other. Also it includes friendship and first love.

I have to say that the book has a weird style, with justified paragraphs and the dialogues mixing with the narration which makes it difficult to read for moments. Other issue was that 2 or 3 times the book changes from Harold’s point of view to third person but it only happens for a few sentences.

Overall, this book is a good fantasy for young readers and adults who enjoy this type of book. It also has a few illustrations that make it prettier to the eye.
Publicado por RuthB en 1:47 PM