I really liked this book.  I read it thank to NETGALLEY.
If you like mythology and love this one is for you.

Forbidden to Love
by D.A. Wills 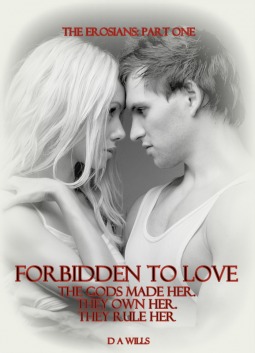 The Gods Made Me. They Own Me. They Rule Me.

Almost a year ago I was rejected and banished by Eros the God of Love. Now I've been forced by Eros to live a life of slavery in the mortal world completely forbidden to love anyone but him - unless I want pain, heartbreak and torture to feature heavily in my future.

My hatred for Eros is almost as strong as my desire to escape this life of loneliness, which is looking very unlikely. Until I see him, the auraless mortal, who steals my breath and burns my heart. Now I have to find a way to be with him even if that means losing everything I have and starting a war to end all worlds. Lucky for me this guys willing to kill to give me a life.

I may be forbidden to love but I'm determined to live.

FIND OUT MORE ABOUT THE AUTHOR: GOODREADS

Acacia was created by Zeus to be Eros’ love interest. However, he doesn’t want her as well as he didn’t want her two sisters Amora and Allana. Now she pretends to be just another teenager going to high school while she matches people as part of her work as a love goddess.

A story about love and compromise, about fighting for what you think is right, about sacrifice and friendship. At first it is a really slow book, in my opinion, because we have a complete explanation of why the sisters were created, a description of the different gods and goddesses. All of which is done to create a more complete world where this story is set, I understand why it’s necessary but it was slow for my taste but once it was done the real story began.

Once Acacia set her eyes Josh the action comes to life. We witness a fast passing story where the love at first sight brings serious and almost deadly consequences. The action is electrifying, full of adrenaline and well written. One of my favorite parts was the Underworld, it is described in a way that really transport you to this terrible place and easy to imagine every creature and the emotion going through the characters.

Acacia is not likeable at first and it seems a bit annoying but once love knocks at her door I liked her a bit more. With passionate and deep feeling we see her falling in love and deciding to risk her life to be with her soul mate. I ended up liking her and wanting the best for her.

The whole Olympus gods is amazing, the author makes an excellent work creating people that looks and acts as more than mere humans. Despite the slow start, the rest of the story is perfect.

Overall, a great story despite its slow beginning. An exciting love story and gods to make things better. If you like sweet and fast romance you should read this one.

It’s obvious that a sequel is on its ways and I expect that there we can find explanations to some unsolved business such as Luca. I was a little taken aback at first because Acacia is all over him without second thought but I’m not going to complain about him or their relationship because I can bet that the reason will be unveiled in the next book.
Publicado por RuthB en 2:20 PM