Welcome to another book review. This book was really hard to review because to be honest, I didn't like it :( So it was hard to write a review without being mean or sound too harsh.  I hope I did an acceptable job.
Read it and let me know.
BTW, I got a copy of this book via Netgalley. 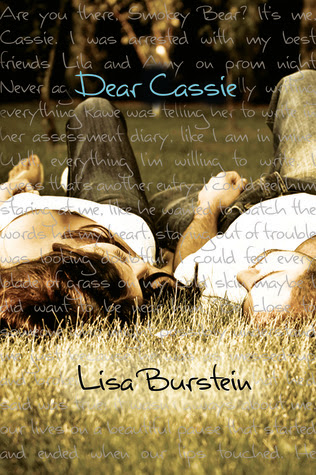 What if the last place you should fall in love is the first place that you do?
You’d think getting sent to Turning Pines Wilderness Camp for a month-long rehabilitation “retreat” and being forced to re-live it in this journal would be the worst thing that’s ever happened to me.
You’d be wrong.
There’s the reason I was sent to Turning Pines in the first place: I got arrested. On prom night. With my two best friends, who I haven’t talked to since and probably never will again. And then there’s the real reason I was sent here. The thing I can’t talk about with the guy I can’t even think about.
What if the moment you’ve closed yourself off is the moment you start to break open?
But there’s this guy here. Ben. And the more I swear he won’t—he can’t—the deeper under my skin he’s getting. After the thing that happened, I promised I’d never fall for another boy’s lies.
And yet I can’t help but wonder…what if?

What if you have done something you can’t forget? What if you were sent to a camp for a crime only you know about? Cassie has been sent to Turning Pines a camp for troublesome teenagers for having stolen pot but she believes the real reason is other.

I would like to say that I loved this book but honestly I didn’t. Cassie is one of those characters you either love or hate, I just didn’t get her. She is a really angry girl to say the least with a dark inside world and a shady past. However, there is never a real and profound explanation of why she is how she is. I can understand why she is angry, why she tries to be cold and build a shield around herself but saying the word “fuck” every five seconds doesn’t make you scarier, it is just annoying.

It is understandable why she has to forgive herself and why is hard for her to share her anguish and her darkest secrets but somehow it never ends up being as interesting as I wish it was. All the teen drama feels unnatural and imposed like if you should feel sorry for her or learn from her mistakes. And I feel like the book has a purpose of making you take a side about a decision-topic that it is way to personal (I don’t want to say much because I will be spoiling the story).

The first half of the book is an introduction of who Cassie is, who else is at the camp plus a bit of the past and the reasons that brought her here but she keeps talking about “this” thing that happened with a guy named Aaron. We turn page after page waiting for the big secret to come out and when we finally discover it, is not the big thing. We kind of knew it already because you have a lot of clues and it ends up being obvious.

Ben is supposed to be her love interest, the guy who jeopardized the walls she has built. I was hoping to have many scenes with him. Yet we only see him from time to time and somehow Cassie starts to have feelings for him. It could be because she is very vulnerable but for me it felt forced. It was believable the idea of him being interested on her but not the other way around. Their romance is good but not what I had expected. It’s not a love story at all.

The other characters are fine despite that the only ones we get to know are the other girls, Nez and Troyer. I really liked Troyer she has a good role in the story and the best parts.

The writing was good and flawless, with a smoothly rhythm and nice dialogues. It was the story what was a little flat and not engaging for me.

In summary it’s a story about forgiveness, letting go of the past and new beginnings. If you enjoy contemporary YA you might want to check it out, perhaps you enjoy it even if I didn’t.
Publicado por RuthB en 1:04 PM