A shade of Vampire - Review & Excerpt

Welcome to another review.
I have to thank the author Bella Forrest for sending me a copy of her book and also for being so generous and sharing an excerpt from A Shade of Vampire.

A SHADE OF VAMPIRE 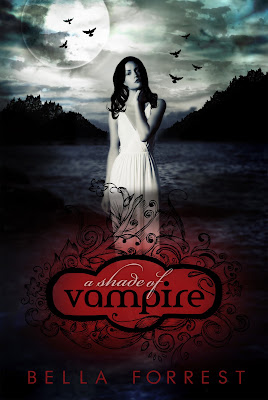 On the evening of Sofia Claremont's seventeenth birthday, she is sucked into a nightmare from which she cannot wake.
A quiet evening walk along a beach brings her face to face with a dangerous pale creature that craves much more than her blood.

She is kidnapped to an island where the sun is eternally forbidden to shine.
An island uncharted by any map and ruled by the most powerful vampire coven on the planet. She wakes here as a slave, a captive in chains.

Sofia's life takes a thrilling and terrifying turn when she is the one selected out of hundreds of girls to join the harem of Derek Novak, the dark royal Prince.

Despite his addiction to power and obsessive thirst for her blood, Sofia soon realizes that the safest place on the island is within his quarters, and she must do all within her power to win him over if she is to survive even one more night.

Will she succeed? ...or is she destined to the same fate that all other girls have met at the hands of the Novaks?

Sofia has been kidnaped and dragged to The Shade. A place where vampires rule and humans are mere slaves. Sofia is supposed to be part of the prince’s harem, however, things will change when Drake set his eyes on her.

What seem like another vampire book turned out to be a great story about a tormented prince vampire (well, maybe the tormented part is a cliché by now) and a girl who has more to offer than she thinks.

A shade of Vampire is an exciting, fast and electrifying reading. It is way too fast because it only has a hundred and few pages, which gives the book a sense of vertigo. You expect something new in every page and most times the surprises knock at your door. The double point of view is a great way to see both sides and have a better idea of the story.

The characters are a topic that could take hours to discuss but here we go… Sofia, our leading girl, is a seventeen-year-old who always felt out of place. She is a strange character, strong at times but extremely dependent of her friend Ben, she is always thinking “what would Ben do or said”. This is annoying because is like if the idea of a love triangle was being built for the way she described her feelings toward him but in my opinion this is not necessary, Derek and Sofia already have enough tension in their relationship.

Derek, he is a character that at first seems like another sickly sweet and depressing vampire but he is full of surprises. When his bad side shows up an amazing character comes to live. I love his bad boy moments and I think he will become one of my favorite vampires.

Then we have Lucas and Vivienne, who are Derek brother and sister. Lucas is the coolest character, he is really evil and I love to find a cruel vampire, is exactly what the book needs. Vivienne has a small role so she doesn’t bother that much.

If you are a vampire lover I’m sure you will find the story is engaging, is true that you may have to overcome a slow start because like I said, at first it seems like a known story but if you keep reading you will find an interesting story, besides the humans as slaves and a place where vampires are the dominant class are an excellent idea.

Another thing worth mentioning is the simple language used for the descriptions, the narration and the dialogues.

Overall, a fun book to read in a few hours with good potential for the sequel.

I’d been meandering along the shore for about an hour when I suddenly sensed that I wasn’t alone. Someone was approaching me from behind. My heart leapt. I was so sure it was Ben, that when a stranger showed up beside me, I couldn’t hide my disappointment.
He must have noticed, because a smirk formed on his lips. “Were you expecting someone else, love?”
I eyed him suspiciously, remembering how many times my father had told me not to talk to strangers. I looked him over, taking in his appearance. My eyes widened. I couldn’t find words to describe how fine a man he was. He was almost beautiful. The first thing I took notice of was how his blue eyes were about three shades brighter than any I’d ever seen before. It was such a stark contrast to his pale – almost white – skin and dark hair. Standing beside me, he was easily more than half a foot taller. His height, broad shoulders and lean build reminded me of Ben, but he had a presence that was far more imposing than my best friend’s.
My gaze settled on his face.
I realized that he was inspecting me just as closely as I was him. His eyes on me suddenly made me feel uncomfortably vulnerable. I gave my father’s advice a second thought, but quickly canceled out all notions of heeding to his counsel when I reminded myself that he stopped caring a long time ago.
I straightened to my full height and mustered all the courage I had to keep myself from running away from this stranger.
Big mistake.
The confident smirk didn’t leave his face for even a moment.
“Like what you see?”
“A bit full of yourself, aren’t you?” I scoffed, annoyed by his audacity.
He stepped forward, closer to me, and leaned his head toward mine.
“Don’t I have the right to be?”
He knew he looked good and wasn’t about to act like he didn’t.
“Whatever,” was my oh-so-brilliant comeback.
My shoulders sagged with defeat as I took a step back, unsettled by how close he was now. I rolled my eyes and did a one-eighty, not quite in the mood to play whatever game this stranger was proposing.
I would soon realize that I was about to play his game whether I liked it or not.
He grabbed my arm and turned my body to face him. This motion alone made every single internal alarm I had within me go off in a frenzy.
This man was danger and I knew it. I tried to wriggle away from his touch, but I was no match for his strength.
“Tell me your name,” he commanded.
I was about to refuse, but was horrified to find myself blurting out my name in response.
“Sofia Claremont.”
As soon as I revealed my name, his eyes lit up with a kind of sinister approval. Then he reached for my face and traced his thumb over my jaw line.
“Hello, Sofia Claremont. You’re one stupid girl for taking a walk alone at this time of night. You never know what kind of evil a pretty little thing like you could happen to come by.”
I found myself wondering exactly what kind of evil he was. But I was suddenly overcome by the sensations that were surrounding me. My senses took in everything at once. I heard the waves, felt the sand, smelled the ocean salt, tasted the flavor of cherry and saw the stranger’s manic appearance as he stuck a needle to my neck. The effect was instant. I was barely able to gasp, much less scream. I went from sensing everything to sensing absolutely nothing.
My last conscious thought was that I may never see Ben again.
Publicado por RuthB en 2:13 PM