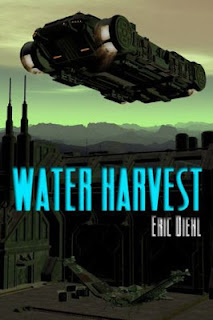 The continuous harvest of atmospheric moisture by lunar orbiters foments a plan set in place to destroy the Harvest fleet, but it is derailed by a twist that allows time for development of a technological work-around. Time passes, and the ruling Houses are caught unawares by an invasion intended to wrest control of the Harvest. The interlopers are aided by wizard-like practitioners whose hallucinogen-induced evocations bend the norms of nature to their will.

Cairn, heir to Alar, is taken captive and then dispatched to carry the warlord's edict. The Maester Viizar, Gezladorn, has his own agenda, contrary to that of the lunar warlord. The Maester is able to manipulate some of the players through mind-control, pitting them one against the other.
Cairn learns of a human-like species that has always kept to itself in the planet's vast cavern system, and he leads a band of men and UnderWorlders on a subterranean journey to rise into the bowels of House Alar. Alliances fall apart and it becomes unclear who is the true enemy before Alar ultimately triumphs.
ADD IT TO YOUR TBR-LIST: GOODREADS


Water Harvest is a science-fiction story with a lot of treason, sabotage and strange creatures. It’s a story about a war for water (that sounds like a good plot). It’s easy to picture people fighting for a precious thing like water and this is basically a tale about people wanting power and control.

The book blends fantasy with science-fiction which is an interesting idea. I like the House division like in classic fantasy novels, each house wanting to take the lead and only thinking on its best interests. Another good point was the medieval customs with the characters treating each other with terms like “My lady”. And the hand to hand fights were another good point. Despite all this, there are descriptions of fights between spaceships that are very well described.

A book with a lot of characters, which is typical of some sci-fi books, most of them superficially described with simple personalities and each one with a different goal. I have to say that for me the names made the story lose its pace, because some like Andl (yes like the conjunction “and” with and L at the end) confused me, I don’t know why but it did.

A story that also includes sorcery and magic, perfect addition in a world where there are no rules to get what you want.

All this ingredients created an interesting story written with an excellent and likeable style. However, the book felt long and heavy at some points, there were moments that felt like a simple narrating of events.

Overall, if you like sci-fi with a mix of fantasy you should read it. If sci-fi it’s not your favorite genre you might find the book long and overwhelming.

*** I received an ecopy from the author in exchange of an honest review.***
Publicado por RuthB en 2:22 PM