Fracture (The Chronicles Of Discord #1)
by D.D. CHANT 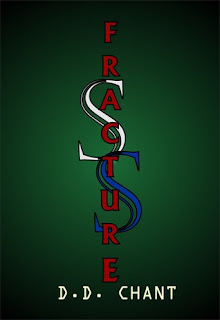 In a world torn apart by war and divided into three nations Astra struggles to achieve balance. As a child she experienced a horror that caused her life to fracture around her, changing in an instant everything she’d ever known.

Sixteen years later and Astra has been pressured into a false position by her past and is forced into taking a stand that enables her to keep her loved ones safe, but the cost is high.
Caught in an intolerable position Astra is loyal to only one thing: the family that loves her. But when a diplomatic mission from the Free Nation arrives for peace talks with the Tula, Astra’s precariously balanced world begins to fracture again.

Fracture presents us a future world divided in 3 nations. The Tula and Una nations hate each other and the threat of war is always present. Then we have the Free Nation, a neutral government.

This is the story of Astra, the survivor of one of the most prestigious families of the Una nation, who has lived the last 14 years on the Tula nation after being adopted by a Tula family. This situation has caused them to be treated as inferior and with disrespect. Astra has grown up with fear, in a constant state of alert, behaving with an attitude of virtual submission, due to the actions of an evil Counsillor. When Senator Burton and his son Ben, from the Free Nation, arrive to Tula territory the story begins. After Ben finds out Astra’s true identity and some of the evils done by Counsillor Ladron, Astra, her family and Ben have to run away.

A story with a slow start, mainly because the introduction of all the characters whose names were confusing at first and a lot to remember, however, it picks up speed once the characters are in Una territory. The minute Astra takes the lead role doing everything in her power to protect her family the story becomes exciting, intriguing and very entertaining.

Full of secret plans and selfish purposes, the story reveals new intentions on every page, as the story moves on we discover more about the past and the present. The suspicion is there all the time, the characters don’t know who to trust and every action has a secret goal and we are surprised time after time.

The book has interesting characters, not all of them are deeply developed but the most important ones have dialogues and descriptions that allow having a good idea of their personalities. There are good explanations about the costumes and dressing that make possible imagine the world in a more complete way.

The storyline is engaging because of the writing, the author has proven once more the quality of it and has a way of telling the story that feels personal and sincere.

Overall, Fracture is a good dystopia with adult characters and a solid background. A story that could include more romance in the next installment and with unsolved situations that will leave you waiting for more.

*** I received an ecopy from the author in exchange for an honest review. ***
Publicado por RuthB en 5:35 PM