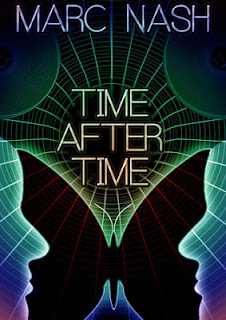 The Yoni Civilisation ruled by women. A civilisation without war and conflict which has left men feeling emasculated. They send an assassin back through the web of time, seeking to kill the mother of the future. To prevent her daughter and her ideas from ever being born, to prevent them from ever existing. And thereby to re-establish the dominance of men once again, turning herstory back into history.

The assassin has several impediments to overcome. He has no weapons to bring with him. He has had no exposure to violence. While his target lives on a sink housing estate in the early twenty-first century, so that he is going to have to battle through his belligerent male ancestors to get to her. The estate is controlled by two brothers, one a criminal overlord and the other a pirate radio DJ who serves as his eyes and ears and communicates to their foot-soldiers through his broadcasts and musical selections.

Yet the greatest hurdle the assassin faces is how to get close enough to the woman. Before he can utilise his lethal if theoretical training to dispatch her, first he has to figure out the yet darker arts of seduction; how to make her even notice him. Thus ensues a hilarious spectrum of seduction scenarios between the same man, the same woman, the same opening chat up lines and a myriad of outcomes. For the most difficult aspect he has to contend with, is that due to the nature of time and its paradoxes, he has to be successful many times over in parallel universes. This is the only way he can fuse all the different potential versions of history into a single definitive thread. And as Chaos Theory and The Butterfly Effect suggest, even the tiniest change in the starting conditions of any scenario, can radically alter all that follows.

"Time After Time" is that rare thing, a science-fiction dark comedy. It explores the minefield that is the dance of male and female around one another in an uproarious way, but always against the background of a menacing urban landscape and of course, with the ultimate aim of the seduction being one of murder. It uses science in a light way, though its very structure embodies the notion of parallel universes and the theory of The Butterfly Effect. It also tackles head on the mind-blowing paradoxes of travelling back in time in order to alter future outcomes. But perhaps the most radical element is that of the DJ himself. Spinning records that not only seem to soundtrack the narrative, but to influence it and to actually determine the fate of the leading players themselves. The novel has a Spotify playlist link to all the songs featured within it.

"Time After Time", where "Terminator" meets "Attack The Block" with a DJ providing the soundscape.
FIND THE BOOK:

Time after Time is different to say the least. This is the story of F-10, a curious man from the future who is sent to the past to change History. The future is ruled by women and by ruled I mean they are the genre in charge, they are no longer the weakest sex. The men are in an inferior position and are treated like almost like slaves. Everything is done according to what women say and they are a little evil for what we can read.

F-10 is contacted by Roger and he convinces him to go back in time and kill the Prophet, the woman who initiates the movement that brings this new world. Easy to say, hard to do for a man without violence experience and with no gun.

The story doesn’t have a lineal course. Set in parallel universes, the story goes forward and backward to show us how little details can change the final result. When story start repeating itself I was surprise to see how a word could create a different story. This is what is magnificent about the butterfly effect, life is a chain of decisions and each one presents its own future.

The book is supposed to be a humor story and it is at times. There is more than one funny dialogue and some hilarious situations. Some scenes between Haley and F-10 are amazing and make you laugh out loud, especially because he is naïve and is like a child seeing the world for the first time.

However, I had a hard time trying to read the slang from the Dj and his brother, I am absolutely sure that they are perfectly written but I think the problems was that English is not my first language and I couldn’t really appreciate and enjoy their dialogues. I understood most of it and find it fun but not as gracious as I imagine it is intended to be.

Another good thing is how music helps telling the story. The songs are placed in the correct places and made the reading more gratifying. The cover is BEAUTIFUL and captures the book essence.

In general is a fun book, with good quality of writing and a sincere and innocent main character.

*** I received an ecopy from the author in exchange for an honest review. ***
Publicado por RuthB en 11:50 AM