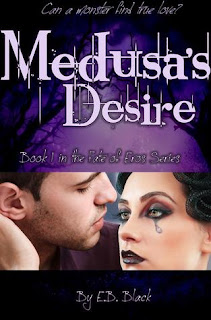 When Medusa was beautiful, finding a man to love her was easy.
Poseidon fought for glances from her heavy-lidded eyes against hundreds of suitors who proposed whenever she left her house.Athena grew jealous. She allowed Medusa to be violated in the Parthenon and turned her into a monster for her indiscretion.


Now when she stares into the eyes of men, they scream as their skin hardens into stone. A caress against her cheek will be rewarded with the poisonous bites of the snakes that slither on her head.No man is brave enough to approach her, until Perseus is ordered by the gods to kill her.


When they meet, desire sizzles between them. They are willing to risk it all-death, the wrath of the gods, the destruction of their families-if it means they can spend one more night together.

Medusa’s Desire is a retelling of the well-known myth of the monster that turns people into stone. This book gives us a new look to Medusa’s life and her personality but most of all, it gives her a human side, making her more sweet and innocent of how we might have pictured her.

Medusa has a tough life. With a gambler father, she tries her best to help her family and her mother. The difficulties in her life lead her to a turbulent path, which eventually take her to be the fatal monster we all know. After being rape by Poseidon she is sent to the Underworld, where she suffers a cruel punishment and an awful torment. Perseus is sent to end her life, but things don’t go as planned and they fall in love.

This book is a rollercoaster of emotions to say the least. The suffering, the hate, the sorrow, even the love is increased by the fantastic ability of the author to transmit the feelings. It may seem violent or too hard to read but is all part of the world where Medusa is destined to live in. It has really hard moments, some that even would classify as adult content, but they are well written and they are a good read.

One of the strongest points of the book is the battle occurring inside Medusa, there is a constant struggle between her good and bad side, and the tinniest step moves the balance to one side or the other. The love she has for Perseus makes her do horrible things, but is difficult to judge her. She has to face horrendous situations which make her a strong and willing woman but also alter her vision of good and evil.

If you like strong emotions, hard situations, strong characters, adult content and retellings, this book is for you.


(I received an ecopy from the author in exchange for an honest review).
Publicado por RuthB en 8:25 PM