WELCOME TO THE AVERSION BLOG TOUR.

Kenechi Udogu ﻿is one of my favorites writers so I'm pleased to welcome her and her new book.
Find out more about Aversion and how was to create the Averters. 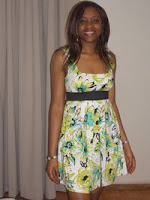 
Kenechi lives in London and enjoys writing fantasy/paranormal fiction and short stories (some of which she posts on her blog). She also hates the cold and hopes to one day figure out how to hibernate in winter.
FIND OUT MORE ABOUT HER: 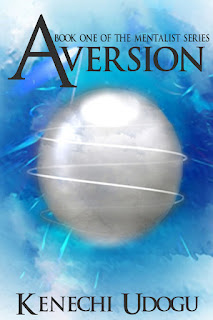 For Gemma Green’s first time, things should have been straightforward.


Find your subject, hold their gaze and push a thought into their head to save them from future disaster – Aversion complete.
A pretty simple process given that the subject was to have no recollection of the experience.
But Russ Tannerdoesn’t seem to want to forget. In fact the more she tries to avoid him, the more he pushes to get to know her. Gemma knows she has a problem but is she facing the side effects of a failed Aversion or has the school’s tennis champ really fallen for her?

I have always been intrigued by the idea of parapsychology – basically, the study of psychological phenomena that defy physical explanation.  Clairvoyance, telekinesis, telepathy, psychokinesis, mindreading. Do these abilities really exist?  Does the human mind have far more potential than we give it credit for? I know a few people that sometimes have dreams that come to pass (some great and some not so good outcomes) so I don’t doubt that the mind is capable of conjuring up more than we are conscious of, however does this mean that it is possible to sense and/or control more than meets the human eye? The notion of psychics and empaths is a pretty old one but it is one that continues to fascinate humanity. Everyday people who can do so much more with their minds without the use of external influences? Someone please sign me up!
The concept of “thought aversion” came to me when I wondered what it would be like to possess a paranormal ability that could help others but still give them the freedom to mess up their lives – because let’s face it, one person can’t really expect to take on that much responsibility. Foreseeing the future was the obvious progression from there, but how would the characters be able to act on this in a fairly unique way? How would a lead character be able to manipulate situations to change the destinies of those around them without being singled out as abnormal?

At first I thought I’d call the character a Preventer, because that’s what I thought they’d be doing, preventing future events from happening. But it didn’t roll off my tongue when I said it out loud. So I crossed this out and scribbled down Mod (short for Modifier). Same principle but, again, this didn’t sit right with me. Then the name, Averter, popped into my head and I knew that was it. Once I wrote this down, I could tell that an Averter wouldn’t just prevent or modify situations, they could have so much more potential - if I wanted them to.

Our psychic/empath in Aversion is Gemma Green, a young girl who has the ability to see future dangers that will befall her assignees. She also possesses a further power that allows her to feed thoughts into people’s heads to stop them from carrying out the acts that would lead to said hazards. As the story progresses, we discover that Gemma’s abilities aren’t quite as straightforward as she thought they would be. In fact, she gets herself into a particularly sticky situation on her first attempt at an Aversion, which she has no clue how to get out of.

If I reveal more about what Averters do, I’ll probably give away too much of the storyline so I’ll stop here. But, what would you do if you wake up in a world where these psychological phenomena are the norm? Would you freak out and run for the hills? Or bask in the warm glow of the unknown? I certainly know what I’d do – let the basking begin.


After reading the Beta version and the final one, I honestly can say that Aversion is an AMAZING paranormal story and the beginning of a great series.

Gemma is not like any other teenager. She is a fifteen-year-old girl with a tiny secret, she is an averter. If you are asking what that means is very simple, they try to alter people minds and change their choices when their facing some danger. (If you want a better explanation just read the book).

Things gets messy in her life when Russ, her first assignment, suddenly starts talking to her and keeps insisting in being her friend. And to make things worse, he is so freaking cute that Gemma can't help to like him.

Gemma is one of those sweet girls, trying to go unnoticed, accepting a fate that comes with a lot of rules. However, when she discovers secrets from the past and all her loves ones are in danger, a tough, brave woman comes to surface.

Russ is the perfect match for Gemma, not only is a tennis player (which in my language means cute body), he is so careless about what people think, funny and seems to take even the weirdest things with an strange calm. Some minor changes from the beta version make him even more loveable.

A fast pass book, with a lot of action, tears, a few breathtaking moments and some good twists. And my favorite part… The cherry on the cake… The end… What a good way to leave us waiting for book 2. An ending that broke my heart a little but also leave me with a big smile. It is a 50/50 situation (if you read the book you know what I mean).

The paranormal base in this book is pretty original with different kinds of people and different abilities. There some explanations left for the next book which is great because I think the series has a lot of potential to be GREAT.

As part of the blog tour, Kenechi will be giving a copy of one of her books, winner's choice.
You will have the opportunity to choose between a copy of THE OTHER SLIPPER or one of AVERSION.

JUST LEAVE A COMMENT WITH YOUR NAME AND EMAIL. I'LL PICK A WINNER RANDOMLY ON JANUARY 21st.
Publicado por RuthB en 11:41 AM