December is turning out to be a great month. I've read more books than ever :)

Today I bring the first book in a trilogy written by Temple Mathews. Thanks to Netgalley I got a copy for review. 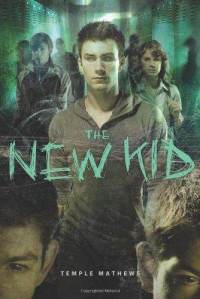 Will Hunter is used to being the New Kid; Harrisburg High School is his fifth new school in less than three years. By now, he knows not to be fooled by the bright pep rallies, the wholesome jocks, the innocent cheerleaders. He knows the evil lurking underneath. It's the same evil that took his dad eight years ago: the same evil he battles every day.
Natalie Holand's life fell apart the night her sister Emily disappeared. No one believes her when she tells them what she saw: yellow and green eyes, glowing beneath the surface of the water in which Emily supposedly drowned.
And Emily isn't the only person to go missing in Harrisburg lately. The town is changing, not for the better, and Natalie doesn't know why. What she does know is that, whatever's happening, it's bad, and the New Kid is right in the middle of it. Because Will's got a secret even bigger than Harrisburg's . . . and there's more to it than even he knows.

The New Kid has the potential to be the beginning of a great series. A young demon hunter, The Prince of Darkness, the damsel in danger and a lot of blood, make this a good book.

Will has move a lot in the last three years. He is not a normal teenager boy, he does not expend his afternoons like most kids and he has to face situations that would scare to death most people. He is a demon hunter.

Will has just moved into Harrisburg and since the moment he takes a step into the high school building, his life starts to change. He used to live by certain rules, staying away from people, but this time it won’t work. After saving Rudy, the little guy will follow him everywhere. And to make things worse, Natalie will join them to form an interesting trio. Natalie has lost his twin sister in a strange episode and she will do anything to find her. She and Will start to get closer and closer which will lead to a great part of the story.

It’s good to read a book with a male character as the leader. We are used to strong women and a change is always good. Will is an interesting character, he is a bit temperamental, aggressive but has a nice side too.

The book has a lot of action and most of the time looks like a good scary movie or some wicked video game. There is blood and punches everywhere, Will and the demons are not afraid of getting dirty. Will is a genius creating weapons to kill darkness. The book gives you a thrilling sensation that will hook you since the first page.

However, the book describes some stereotyped demons. I don’t understand why the bad guys have to wear black and leather, listen to Goth music and look like some cliché. If we change the way they look, we would have the meanest young demons ever.

The book moves really fast. We have fights in every chapter, a lot of chasing and the end arrives pretty soon. The end is good but it has some parts which are predictable (for example who Will really is).

The New Kid has real potential to be a great series.
Publicado por RuthB en 8:59 AM