Blues in the Wind-Revisited - Review & Interview

Happy Sunday!
Today I welcome author Whitney J. LeBlanc.
He was kind enough to send me a copy of his book and also has provided an interesting interview.
Keep reading to learn more about him and his book.

BLUES IN THE WIND-REVISITED
by Whitney J. LeBlanc 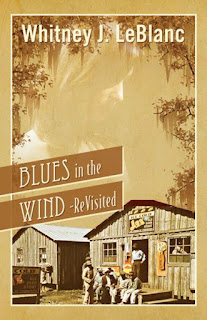 Sometimes, sweet dreams end up into nightmares.
In the 1930’s, Phillip Fergerson’s marriage to Martha Broussard, the beautiful Creole woman of his dreams, turns into nightmares. Instead of becoming the doctor he was supposed to be, he becomes a high school teacher. Events of murder, lynching, voodoo and sexual abuse by a priest will set in motion the disintegration of his family.
Martha’s brother, Lightfoot, performs blues music in the juke-joints, as he witnesses the beginning of the blues as an art form. Here, we follow the early blues legends from Robert Johnson, Bessie Smith, Leadbelly, to Lightin’ Hopkins and BB King, as they sing their way through the Delta.
Martha, a proud and devoted Catholic, looks on in horror as one by one, her family falls under the influence of the devil’s gut-bucket music. With their marriage falling apart, Phillip finds himself in the arms of a woman from his past. As each of the four children go their separate ways, Martha blames it all on the influence of the sinful music.
FIND THE BOOK HERE:
*****
MY REVIEW.

Once in a while you find yourself face to face with a book that causes really strong feelings in you, a book which leaves you asking yourself what a person could do to protect her or his family according to their beliefs.

Martha is a creole woman living in a world that is changing, dealing with her prejudices, her beliefs, her idea of what a good person should do and a family that takes a path she hates. After getting married to Phillip, a former medicine student that has to drop college when Martha got pregnant, they have 4 kids and life will never be the same.

Nothing goes as planned in Martha’s life. Her brother is a blues lover. One of her daughter also loves the “sinful music”, the older daughter lives a life that causes shamed to Martha, his loving boy ended up married with a woman that is not the one Martha chose and to make things worse the only one that seems to be a Christian devote gets pregnant by a forbidden man.

Martha takes really bad decisions to correct her children path, but they only make things worse. Is easy to dislike her because the hate she emanate goes beyond the pages of the book, but behind that strong and “evil” woman we find the perfect example of a person raised under the influence of strong principles, in a time of racism, hate, intolerance, and the idea of being perfect. A woman with the dilemma of not being white or black enough, trying to find her place and fighting to be accepted for those she sees as equals.

This book is set in the first ages of Blues, which gives it a better rhythm and the feeling of being watching a 50s movie. It gives the perfect platform to really visualize the opposition between Martha and her brother and also the rest of her family. She tries hard to hate the blues but deep down in her heart it is present.

Blues in the wind – Revisited is a strong book. With very well described characters, a solid background and with words that have the power of transgress the pages and drag you to a vivid world. Presenting the creole community and the origins of blues this is a book that will not disappoint you.

*****
THE INTERVIEW.
Ruth: If you had to describe Blues in the Wind-ReVisited in one sentence, what would you say?
Blues in the Wind-ReVisited is a rewrite of Blues in the Wind, a restructuring of the format and enlargement of some of the characters.
Ruth: How did you get in touch with the Creole community?
I am Creole. I grew up in a Creole community. Many of my relatives are Creole. I am writing about people I know.
Ruth: Are you satisfied about what you have told about the Creole community?
Whitney: Yes. In a word many of the Creoles were skin-color bigots, and contributed to the racial prejudices that were perpetrated by whites. Creoles were not accepted as white by the white people and they did not consider themselves Negro or black. The lived in separated communities.
How was the process of creating the previous story of the other two novels?
Whitney: When I submitted Blues in the Wind to the publisher, she told me it was too long. It should be contained in 350+ pages and should be cut. I decided then to write a trilogy so that I could tell the complete story of the growth development, and emergence of the family. I wanted them to grow out of the racial prejudice in which they were mired. I also wanted to tell a story about the growth of the blues and how it affected the various generations. So the Blues trilogy was born.
How was creating a character like Martha?  Were you inspired by any real person?
Whitney: I grew up knowing a lot of Marthas.  They were beautiful, selfish, prejudiced and aggressive. They always fascinated me. One thinks of beauty as being good and moving. People are drawn to things of beauty. But often the beauty is deceitful and evil and so was Martha. I had a lot of fun creating Martha. Her belief in Catholism also added to fascination---how can one so religious think so evil. The reality of Martha is duplicated in the real world many many times, and yet they have a justification for being who they are.
Ruth: It was hard to understand Martha sometimes, but did you ever get upset or mad at her?Whitney: Martha is true to herself. She is complicated. She loves but only on her terms. She is beautiful and lovable but not loving. She is selfish and wants everything on her terms. In Blues in the Wind-ReVisited I began each chapter with Martha’s thoughts, the things that she feels and believes, so that the reader would get to know her better. Her choices were not always the best but they were her honest feelings and the motivation that formed the bases of her actions.
Ruth: There were some moments that were hard to read, the things that Martha family have to live are really strong. Did you ever feel like it was too much?
Whitney: Life, as in a novel, is full of conflicts. The stronger the conflict the greater the resolve to overcome.  The decisions that one makes revels who they are, and this is also true for Martha’s family. As each of the children grows to discover exactly who their mother really is they have different reactions.  It was extremely hard for Phillip to accept the reality of Martha and he tried to find a truer more sincere Martha in her look-alike sister. It is very difficult to lose ones dreams; they define who we are.
Ruth: How was it to do a research about the birth of the blues?
Whitney: Difficult and intense. I read many books about the birth of the early blues. I used the blues because it created conflict for the Creoles. Creoles do not like the blues. The blues is the music for the skin color black. I began the story with the beginning of the blues as an art form, when Louis Lomax and Leadbelly toured the Delta and recorded the blues, which is now housed in the Library of Congress. All of the blues singers mentioned in my novels are real and the dates of their appearances in the story are accurate so the research was intense and true.
Ruth: Would you like to turn your books into movies?
Whitney: Yes!
Ruth: Is there another story left about the Fergerson-Broussard family?
Whitney: No! The trilogy is complete.
**** THANK YOU FOR THIS LOVELY INTERVIEW ****