OMG!!! I loved this book. I am now a fan of Heidi Acosta and I'll be waiting for the next book in this series.
Just keep reading to know more about Barbie Girl and the author. 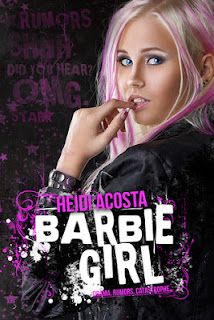 Have you ever judged someone by what other people say about them? There is a saying that goes like: Never have to judge a book by its cover and I think it applies to people too. Not everyone is who they seem to be. Barbie Girl is one of those books that you can't put down. A sweet romance with a lot of drama and a rollercoaster of emotions.

Barbie needs a tutor and she asks Dylan for help. Dylan thinks Barbie is nothing but troubles but he is in love with Katie and Barbie can help him get the perfect girl. Since the first moment they set eyes on each other, nothing will be the same for them.

Barbie is the school slut, but appearances are only that. People can say what they want. Barbie has spent her life building walls around herself so nobody gets closer to her and she keeps her life as a secret. Her mother, her little brother and some really awful situations are a world that only Barbie sees.

Dylan is nerdy guy with a hot look. With an average life, a little sister, his best friend, he is trying to go through high school and has been in love with Katie for a while. He and Third are inseparable until Barbie comes to scene. Third is the funnier character of all. He is such a lovely guy with an incredible sense of humor. He surprises at times and takes a relevant part in the story, breaking with the classic best friend role.

The book moves really fast. The relationship between Barbie and Dylan evolves in a wonderful way, is a cliché in some aspect but is beautiful and romantic. They are perfect for each other, even if they don’t know it. Read about how they deal with these unknown feelings is the best part of the book.

There were moments where you hate Dylan for the way he reacts but is perfectly understandable. It feels real and natural. And Barbie too makes some decisions that are terrible. But those things only make them more real, more humans, people are not perfect and neither are any of the characters.

Barbie has a really tough life and the author makes a wonderful job portraying some situations which are really hard to read. Despite it seems a simple romance this book is deep and explores some realities that we don’t see regularly.

It has a very good resolution with a great ending. The end… what a cliffhanger! It leaves you waiting for book two and biting your nails.

Ruth: What inspired you to write Barbie Girl?
Barbie was originally a character in another novel I was working on. She had a very small part. She was, uh hmm… well, she was messing around with the main character. She was such a strong character that she stuck with me. I wanted to know why she was the way she was. I obsessed over her for a few days. It was not until I met a friend for coffee and was telling her about Barbie, that she said I had to write her story. Once I started, I couldn’t stop writing about her.

Ruth: How long took you to write it?
Heidi: 3 months, total. 2 months to write, and one month of editing.

Ruth: When did you decide to write more than one book about her and this world?
Heidi: At first, it was only going to be one book. It was not until I got into the nitty gritty of her story that I knew that one book just would not be enough to tell her whole story.

Ruth: How was to create a character like Barbie?
Heidi: Barbie was so much fun to write. She is just herself. She does not care what other people think. One of my favorite parts of writing her was imagining the clothes she wore. She is such a strong character, that strength comes from her drive for the people she loves. You see it with her brother and the way she takes care of him, but also with her mother. Even though she hates what her mother is doing, she still loves her. As for Dylan, she wants him, but knows that she is not right for him.

Ruth: Are Barbie or Dylan based on any real person?
Heidi: Completely fictional. They both have traces of people in my life, but they are completely themselves.

Ruth: There were moments that almost made me cry. How was to write about all the emotions and feelings Barbie has to face?
Heidi: Sometimes it was really hard for me, because I was so emotionally attached to her. I felt what she was feeling. When she was emotionally high, I was right there with her. When she hit low points, I was low too. My husband learned quickly that if I was in a bad mood, something was going on with Barbie. Poor guy! Lol!

Ruth: Did you ever get upset or mad at any of the characters? (For example Barbie’s mother).
Heidi: I never got mad at her mother. I was frustrated with her and wanted to shake her and tell her to wake up and be a mother, but I was never angry with her. There is a reason she is the way she is. However I did get mad at Dylan. I was like, “You stupid boy! Don’t you see what Barbie is? Don’t you know what you have?”

Ruth: Is there anything you like to change about the book?
Heidi: No, I think it had to be told the way it was. There are people really dealing with the issues that Barbie has to deal with. I wanted it to be told that addiction hurts everyone involved.

Ruth: I saw that you are planning to write 4 books in the series, all of them are going to be about Barbie?
Heidi: The second book is Barbie’s story. The other three are other characters from Barbie Girl. Barbie will make an appearance in all the books, but they are not her story. The third book is Katie’s story. The fourth is a character you will meet in Barbie World. I am also planning on writing a fifth book about Everett.
Ruth: Can we know a little about what is going to happen in book 2?
HEIDI: I can tell you this. Barbie World is going to be another emotional rollercoaster. We will learn a little about Barbie’s mother. We will also see Dylan fight for Barbie in the second book. He lost her once and is not about to lose her again!


FIND OUT MORE ABOUT HEIDI AND HER BOOKS: