Hi! It's time for a new blog tour stop.
As part of my stop I have a review for the book. Just keep reading to find out more.

Today is the turn of : 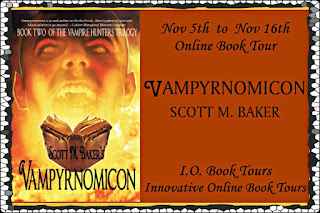 Scott’s first zombie novel, Rotter World, which details the struggle between humans and vampires during a zombie apocalypse, was released by Permuted Press in April 2012.


When he is not busy writing, Scott can either be found relaxing on his back deck with a cup of iced coffee, or doting on the four house rabbits that live with him. 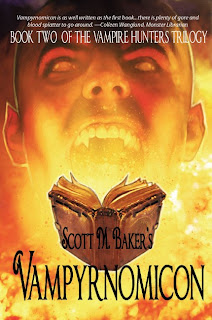 Within the vaults of the Smithsonian Institute lies the key to finding the Vampyrnomicon, the Book of the Undead, that contains the history and secrets of the vampires.  According to legend, whoever possesses the book can establish a vampire nation on earth – or destroy the undead once and for all.  With an opportunity to end the war against the undead so close, Drake Matthews is determined to find the book.

But the vampires also want the Vampyrnomicon.  When Master Chiang Shih and her coven of the most powerful and dangerous vampires arrive in Washington to claim the book as their own, the hunters find themselves facing their most dangerous enemy yet. With the stakes so high, so is the ferocity of the struggle.
FIND THE BOOK HERE.
My rating: 4 of 5 stars

Vampyrnomicon is an exciting and refreshing reading. It is an excellent return to the classic vampires, the bad and dangerous ones.

In this book we have the hunters, a group under the leadership of Drake a former policeman, a group that will go until the last consequences in order to kill all the vampires in the Washington area. Alongside with Jessica, a journalist, they will set on a quest to find an ancient book that contains the key to destroy all the vampires permanently.

The bad guys are leaded by an ancient vampire. Chiang Shih is an Asian woman (a millenarian vampire), with an interesting past and who is the personification of evil. Accompanied by a group of masters (the leading vampire of a coven), she will also follow the trail of the mysterious book.

The book is complete with the tension between Derek and one of the hunters, Alison, this tension only adds fire to the story, especially when Derek is with someone else.

A story that moves really fast, that changes the point of view to give a wider panorama and a more complete story. This book has the perfect amount of action, danger, romance, bad guys, sweet characters and an ending that will leave you wanting for more.

An excellent written book that reminds the greatest classical vampire writers, with great characters and sexy scenes this is a book that will not disappoint all the vampire lovers.

The story is compelling since the first sentence. And one thing worth mentioning is that it doesn’t matter if you didn’t read book 1, the story is easy to follow and you won’t be missing any relevant fact. However I think that the book gives you the encouragement to read the other books in the trilogy and you definitely will need to read book 3 to know the end of the story.
Publicado por RuthB en 7:35 AM