The Whispers of the Sprite - Review :)

I loved this book. I read it in a few days and now I have to wait for the sequel.
Thanks to Joanna for providing me with a copy.

The Whispers of the Sprite
by Joanna Mazurkiewicz 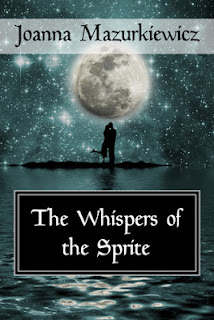 When Ania moves from London to Swansea city in Wales she is hoping that her life will get a bit more exciting, after all she is running away from her controlling mother to taste more freedom and feel more independent. Everything seems to be going the way she wanted until she almost dies while taking a quiet walk around the beach in the late evening.
When she opens her eyes, nothing seems the same...
She starts seeing people that no one else is able to notice. An enchanting looking man keeps following her and Ania’s life seems to getting more exciting than she ever wished for.
After the attack something changes inside her, she has been blessed with the new frightening gift of seeing and hearing sprites all around her... the magical creatures that only existed in folklore, myths and legends of Britain.
Gabriel is attractive and handsome but no ... he is not a vampire. He keeps coming back and Ania feels an instant connection between them but this might get her into more trouble. Supernatural romance is not on her mind right now.
Because he is forbidden to even touch her ... the line between the death and love has never been so thin and the sprites won’t stop whispering until ... she will choose to love or abandon Gabriel.
This is a young adult paranormal romance which includes violence and sexual scenes.
FIND THE BOOK:

Ania is finally away from her controlling mother. But the perfect life she was expecting is nowhere near. After being stabbed she starts seeing people that it supposed to not be there. Her life becomes a turbulent ride between someone trying to kill her and falling in love with a magical creature.

The Whispers of the Sprite is intriguing since the first sentence. The story drags you into the mind of Ania and we live the story through her eyes. A 22-year-old girl, going to University in Swansea (Welsh) and shares a house with three other people. Her roommate, Amy, is a bubbling girl, who likes to party and is very funny and loyal.

The story is complete with Gabriel, a sexy, self-confident, intriguing and magical man. He has one of the best personalities in the book. He is not like most men in YA novels; he is a bit romantic but he is not corny and despite he is arrogant and lacks humility you can’t help to love him.

Ania is a well described character, she feels real and her mind works like one of a young adult woman (I could feel relate to her). However, there were some times when I wanted to scream at her and ask her why? Why are you doing that? These feelings only made the book better.

The folklore behind the Sprites is easy to understand, but there were a few things that were hard to follow, like the all changeling myth (I understand most of it but I think it could be explained differently).

The tension between Ania and Gabriel, and their sexy relationship, makes hard to put down the book. It is not as romantic as other relationship but it is pretty intense.
The secrets, bad guys and magic in the book make the perfect mix for a great read. With the cliffhanger at the end you will end up waiting for more.
Publicado por RuthB en 11:10 AM