Hi everyone! It's been a while.
It's time for the review of book number 2 in the Lunangelique Series. I have to say that I'm falling in love more and more of this series.
I have to thank Kristin for sending me an ecopy of it, I ADORE YOU GIRL!
And I'm in love with this cover, IT'S BEAUTIFUL :)

You can check my review for book 1: HERE. 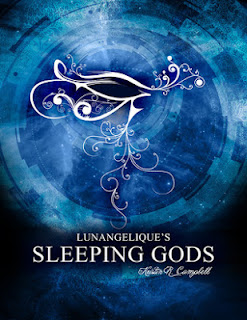 FROM GOODREADS:
Alexis must pick up the broken pieces of her heart and pull herself together because she has a mission: To awaken the sleeping gods. When she is at the point of giving up, wearing her pretend smiles and feels like there is nothing left of herself, her friend becomes her savior. Patryck helps put Alexis back together again and in return Alexis sees him as something more than a friend…


Together with her brother, Alex, her father, Edmund, and a team of angels they make their way to Mount Latmos, to awaken the gods. But obstacles are in their way, one of them being Cole, the traitor, the one who shattered Alexis’ heart.
New friends and family she never thought she would meet will come to aid Alexis.

… And a love will blossom that will redefine the saying, “Love you forever.”
FIND THE BOOK:

Is possible to forget your first love? Can you move on with your life after so much suffering? Would you wake up the gods if that will bring destruction?

These are all questions that Lexi has to deal with in the second book of the series. After been abandoned by Cole, Lexi is depressed, sad and almost living in automatic-pilot. After six months of going by life like a zombie she finally decides to move on with the help of Patrick.

Lexi and Alexander (her twin brother) will join forces with Edmund and his team of angels to free the gods from their sleep. The journey will be full of obstacles because many people want them to fail.

In book two we see a different Lexi. She has to learn to move on, to forgive and discovers new sides of her persona. While her heart is divided between two guys, she has to remember the independent girl she used to be. Is amazing to see her evolve into a really strong woman with the ability to accomplish anything she wants.

Patrick takes a more relevant role in Sleeping Gods but somehow he is a character that you don’t fully love. He seems like a good guy but deep down we all know what kind of person (or angel) he is. Edmund continues to be the overprotective father, taking decision for the rest and wanting to impose his will over others.

Cole, what to say about him? I’m team Cole since book 1 and this second part only made me love him even more. He is sweet but with a dark side and really cares for Lexi. He continues to be the person that brings the best of Lexi and that helps her through her most difficult moments.

The action in this book is amazing. Every chapter brings a new twist and you never know what to expect. And the tension between Lexi and the two guys is what this series needs.

Sleeping Gods will take you on a ride of emotions, will take you breath away and more than once will bring tears to your eyes. With an ending that will leave you at the edge of the seat waiting for part three this is a book you will love.
Publicado por RuthB en 11:44 AM