It's time for the review for the first book on a series written by Astrid Cruz a.k.a.  "Artistikem".
It is a short book (only 56 pages in my pdf file) so if you feel like it give it a chance.

THE CAREGIVER (The Caregiver, #1)
by Astrid Cruz 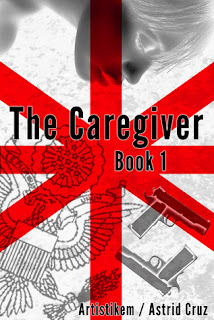 FROM GOODREADS.Scarlett Lang always dreamt of becoming an Interpol agent. When her hard work pays off and she's given the chance to work as an undercover agent with London's biggest drug lord, Armand Sayer, she can't help being ecstatic about it.

She's employed by Armand's sister (to aid in his recovery from a gun attack) as both caregiver and bodyguard. Her resourcefulness in both areas helps her win much more than Armand's trust, to the dismay of both his right-hand man and her ex-boyfriend / colleague.

As she makes her way into the business she swore to help tear down, she's faced with the dilemma of choosing between being loyal to her profession or her heart. And we all know it can't be both.
FIND THE BOOK HERE:

A fast and interesting book that will introduce you in a world of undercover agents and criminals like you have never seen before. This is the first one on a series that has a lot of potential.
The Caregiver is the story of Scarlett, an Interpol agent who has to be the caregiver of an important Drug Dealer. During her mission, her loyalties will be tested and her heart will be put at stake.

Scarlett is an interesting character; she is a strong woman with a strong personality. I think there is so much of her to see and her character is one of those who will evolve as the series moves on.

One of the best things was to read about the relationship between Scarlett and Armand (Mr. Sayer), to see how it evolve and see where it headed. At first I didn’t could figure out how they feel about each other but after a few pages their feelings are better described and you see what is going on.

The business world (which means the criminal world) is a good background; the bad guys are a good addition and some of them are really bad-asses. And all the secondary characters are interesting in their own way.

After we discover who is who, the story takes off. Is full of action and you can’t help to read it in one sit. And with a remarkable ending, not only leaves you waiting for the second book but also the scenes are well described and you can picture them in your head in detail.

Overall, a well written book, with good characters, a lot of potential to be a great series and with an ending that leaves you wanting for more.
Publicado por RuthB en 6:42 PM