I had this ebook on my reader for a while and I don't know why I didn't read it sooner. I have to say that I'm truly surprised about how good it is.
The cover isn't one of my favorites but is the perfect example of why you don't have to judge a book by its cover.

TOE THE LINE
by DICK HANNAH. 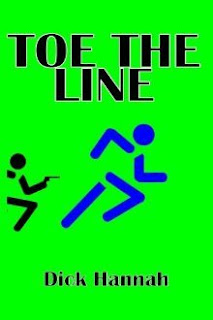 From Goodreads:
In Toe the Line, small business owner and triathlete, Wynn Johnston, finds his ordered, predictable life thrown into turmoil when his training and business partner, Wheeler, is murdered in the seemingly safe confines of the Seattle airport.

As Wynn begins to dig into Wheeler’s past he finds out that his best friend was involved in a racing conspiracy that puts Wynn’s business and his life in danger. Wheeler’s murder forces Wynn to confront deceptive fellow racers, the potential bankruptcy of his business, and past loves he thought long dead, all while avoiding the murderer who is hunting him across Seattle.

Filled with deep and engaging characters, scenic descriptions of the Pacific Northwest, and a female main character who is the impetus behind the action, this novel provides both male and female readers with an intriguing, well-rounded, fast-paced mystery and a glimpse into the world of triathlon racing

Toe the Line is the living proof that you don’t have to judge a book by its cover. The cover is not one of my favorites even though I love the green color. However I discovered a great story with a lot of things on its favor.

This one is probably the greatest thriller-mystery book I’ve read this year. From the first page I was drawn into the action. From page to page the story became more and more interesting. An excellent written plot with turns and surprises in every page, Toe the Line has all the ingredients to be a great thriller-mystery novel.

Written from Wynn point of view, we first find him after his best friend got killed at the airport. While the police officers are carrying the investigation for his friend’s murder Wynn found out secrets and sides of Wheeler unknown until now. Besides this he has to deal with his ex-fiancé, Madison, a woman with no fear of telling what she thinks.

Wynn is a great character. We get to know him not only because is the narrator of the story but also by his interaction with other characters. We meet a sport lover, especially triathlons, with a great respect for his friend and that wants to find out the truth.

We see him dealing with the revival of his relationship with Madison and with all the unsolved things between them. They are two well-developed characters and you ended up feeling affection for them. They complement each other in a perfect way.

The murder and the search for the killer are amazing. The actions are easy to understand and fun to read. Luckily this wasn’t one of those books where you discover who the bad guy before the end, I was really surprised about how things turned out to be.
A book that sums mystery, friendship, romance, gunshot, running for survival and most important the message that sometimes is good to take second chances.