Happy Sunday! This is a quick post because Spring is almost here and I'm enjoy a lovely sunny day :)
So here's a new review.
Benjamin Burrell contacted me a month ago and something really interesting about him is that he lived in Uruguay :) Can you believe it??? It's amazing.... He knows where I live and has very good memories of my country.

Red Leaves and the Living Token by Benjamin Burrell. 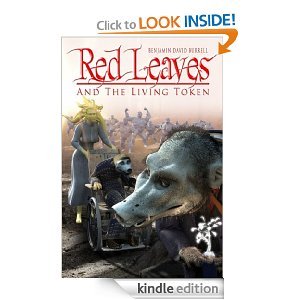 FROM GOODREADS:
Doctors tell Raj that his son Emret won't survive his illness. As Raj struggles to prepare himself and Emret for the inevitable, he's confronted by Moslin, his son's nurse, who’s been filling Emret’s head with fairytales about heroic quests and powerful disease curing miracles. Emret now thinks that all he has to do is find the mythical Red Tree from the nurse's stories, and he'll live.
In an attempt to protect his son from further emotional damage, Raj asks Moslin to stay away from Emret. He returns hours later to find them both missing.
He searches the fairytales for clues to where they may have gone and stumbles upon stories that, strangely, he already knows. He saw them in a vision just before his son disappeared.

Red Leaves and The Living Token it may be just another fantasy book but it has some things on its favor. A story about a father and his dying son on the quest for find a miracle cure.

After a hard start where I didn’t feel very related to the story and I didn’t understand where everything was going, things changed for the better. Once the magic and the fantasy were involved the true action began.

A book faithful to the fantasy genre, Red Leaves creates a world where this three kinds of beings live and where magic is possible.

Ben has a beautiful writing skill, describing the surroundings and the character’s feelings in a lovely way. Even there wasn’t a particular description on each one you can get to know their motivations and beliefs as the story moves on.

My favorite part was the behavior of the Red Leaves the idea that not everybody can see them, for me it was like only the kind hearts have the chance to see them.

Raj is an interesting character, a father willing to do everything for his son. A person that has to accept that sometimes magic is real and to trust his son in order to help him with his burden.

The book ends with a great hook and leaves you waiting for the sequel. In my opinion the series has potential to be amazing.
A recommendable book for all the fantasy lovers.