A new review!
I had never read this kind of sci-fi before, but I really liked. It was a lot more than I expected.

OTHER SYSTEMS by Elizabeth Guizzetti. 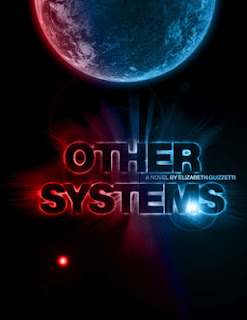 From Goodreads:
Ten large ships race toward Earth, broadcasting in every language: "Brothers and sisters, we come in peace and in need. We have found our way home." The fear of a coming invasion begins the worldwide riots of 3062.
Yet, not all Earthlings fear attack. The newcomers, long lost descendants of Earth, speak of a paradise ninety-four light years away. Kipos is a land of plenty where there has never been hunger, murder, or war. However, they need more healthy young immigrants for the colony to thrive.
Many accept their offer to be tested. After assessment, Abby Boyd Lei is among the chosen. She leaves the protection of her family with dreams of higher education, a good job, and a kind-hearted spouse.
Will Kipos be everything she imagined? Abby is about to discover the cost of utopia.

I’m not a sci-fi fan but if you would say that based only on one book I could say that I love that genre. Other Systems present an original story, that never goes according to what you think should happen.

Other Systems is the story of Abby, a young girl living in a future Earth trying to live according to what is expected. Things change when descendants from people that was sent out in space returns with the promise of a better world full of opportunities.

What would you do if someone offers you the opportunity of getting to know another planet? As Ally I would go without second thoughts. But everything comes with a price and as result everything in Ally’s life change.

Kipos is the name of the new Planet and since the moment she arrives is obvious something isn’t right. And from that point on the book is AMAZING.

The space and all the planets are described in detail and even a person like me that doesn’t know nothing about it, can picture everything and you almost feel the same excitement that Abby is feeling. The creatures, the landings, everything is breathtaking. It was like seen a movie or even as being inside a spaceship.

The best part of the book is the characters. They are well written, amazingly described and some of them are really cute.

Abby is probably one of the best characters I had the lucky to read about. She has to deal so much and in so little time that it’s incredible the way she gets through everything without giving up. At times I almost cry because of what she was living and I nearly punch at my computer :).

The story never lack emotion, because between the travelling through space, the crew on the revelation and Abby’s mind you are always reading something new and having fun reading.
I’m so glad about how it ended, I’m only going to say that I couldn’t have think in a better ending. It’s truly an amazing book.