Give Death a Chance - New Review

A good way to start the week is with a new review. Today I bring you a fun and quick-to-read book.
Here it is.
I got it thanks to Netgalley! 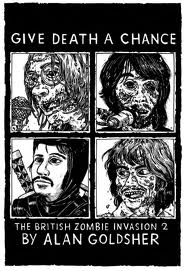 GIVE DEATH A CHANCE (THE BRITISH ZOMBIE INVASION 2) by ALAN GOLDSHER.FROM GOODREADS:
It’s 2009, and Zombie John, Zombie Paul, Zombie George, and Ninja Ringo are poised to show the United States the true meaning of Beatlemania. During their first American tour since 1966, they throw down with supergenius supervillian Justin Timberlake, get abused by scantily-clad chanteuse Madonna, do some dreadful things to wannabe Zombies Noel and Liam Gallagher, possibly behead Eminem, and take on Lady Gaga’s “Little Monsters”, all in the name of climbing to the Toppermost of the Poppermost. In the hilarious, gory sequel to the critically acclaimed mashup, Paul is Undead: The British Zombie Invasion, author Alan Goldsher is the road manager and appointed scribe for the Poppermost Over America Tour, insanely crisscrossing America in a foul-smelling van packed with three short-tempered, power-mad English Zombies and one frustrated Ninja drummer. Throughout the mayhem of the brains-fueled tour, Goldsher finds out what it really means to Meet the Beatles, and answers the oft-asked question on the lips of every Fab Four fan, “What does Liverpudlian Zombie breath smell like from two inches away?”

The Beatles + Zombies = A funny boook.
If you love The Beatles you should read this one because is a funny approach to them or at least at the zombies ones.
Give Death a Chance presents a world where Paul, John, Ringo and George are alive or sort of. They are a zombie band that is travelling through USA searching a way to have an fantastic come back.

The story evolves really fast and it is full with funny moments. With hilarious dialogues and the craziest of Liverpudlian Zombies. (And a lot of British winks).

The story names popular pop icons such as Madonna and Lady Gaga, to create a real and modern background. We are introduced to a whole new side of The Beatles. John is really crazy, it looks like he doesn't know how to deal with being a zombie or maybe he is just mad.
I have to say that some descriptions were VERY GRAPHIC, every step of the killings is very written wich is good. It's not disgusting, if you are a fan of horror films, you will find this very interesting.

The only thing I didn't understand well was the Ninja stuff but it didn't matter that much and it wasn't hard to read the book because of that. Maybe I should had read the first book before trying the second one.
Overall, a fun, quick and interesting book to read.