I just finish Hope's Daughter (by Melanie Cusick-Jones). I'm still surprised and wordless because IT'S AMAZING!!
I can't thanks Melanie enough for the opportunity of reading her book. I was really excited when I received a message from her, in which she asked me if I wanted to review her book. Of course I said yes, but I didn't expect to feel like I do now.
I can't put in words how much I liked her book. I 'm not saying this just to be polite or anything. I really LOVED the story. It's probably the best I read this year. I always enjoy the genre of dystopia, but this one is so different to the ones I read before. Cassie and Balik are great characters, not to mention how SEXY Balik is. I really recommend you this one.
I can't wait to read the sequel.
I also want to thank Melanie for writing "Taking Flight", this short chapter that fits before the epilogue of Hope's Daughter. 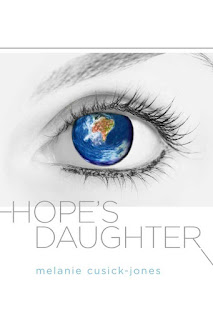 Life should be simple for Cassie.
For the small population of Earth survivors who live on the Space Station Hope everything they do is planned and scheduled, down to the cyclical food menus, their roles in the station, even how many children they have.
Despite rigid controls directing her life, Cassie feels more out of synch than ever and worries she won’t find a place for herself within the station community. Perhaps that’s because she’s hearing things inside her head that can’t possibly be real. Or maybe it’s the regular elopements of her peers, heading off to a romantic future in the Married Quarter of the space station, whilst she’s never even been attracted to a boy – no matter how hard her best friend Ami pushes them at her. Then there are the odd questions her work placement partner Balik keeps raising. His questions are just as troubling for her as his distracting smiles and eyes that seem to see inside her.
As Cassie draws closer to Balik she finds that everything else in her life begins to shift. He tells her things that call into question the system they live within. She can't believe he is right, but at the same time she finds it hard to deny the sincerity of his ideas. Could there be a connection between Cassie’s problems and Balik’s questions? The truth will drag them both to a terrifying and deadly conclusion beyond anything they could have imagined.

“What if the world as you knew it, wasn’t what you thought it was?”
Cassie and Balik start to question the world they live. This will only lead them into the discover of a terrifying truth.

From the cover and the prologue, I was dragged into this amazing story. Not only a well argumented dystopia but also a story about love, self-discovered, survival, and above all humanity. About those things that makes us who we are. I couldn’t put it down and I wanted to know what’s next as I continued reading.

The life in Hope’s Station is planned from the foods to the behavior expected from the population. Anything that not goes according to these is an anomaly and as such it won’t be a good thing.

Cassie is one of those great female characters you love from the beginning. But unlike other female characters, she is very strong and determined from the start. She discovered some facets of her personality through the book but it’s not like she was totally naïve before anything happened. Since the start it was easy to relate with Cassie and the way she feels about her role in the station. How she feel out of place and her worries about her future are something anyone can understand. And as the story evolves you really feel you know her and want to join her along the way.

Balik… what to say about him? HE IS SO SEXY. And he is a great character. A fantastic male partner to Cassie, that complement her perfectly. All about him is perfect, how he feels about Cassie, his curiosity, his temperament and how he sees the world.

The action develops in the perfect amount to keep you wanting for more. Every chapter brings a little bit more of the story and adds a little more to the anxiety that was growing inside me.
The last few chapters managed to describe what need to be explained and surprised me to the point that I was speechless.

This is an excellent book. The kind of book that makes you wonder a lot of things and makes you experience a roll-coaster of emotions as you read it. An original dystopia with a few twists, that will keep you wanting for the sequel.