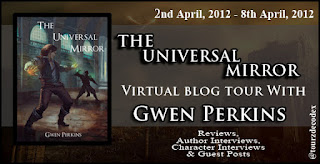 Hi people!  This is my very first Blog tour. :)
This time I had the chance to read this great book "THE UNIVERSAL MIRROR" by Gwen Perkins and also had the oportunity of interviewing Gwen.
So I hope you enjoy (as much as I did) the interview and my book review! 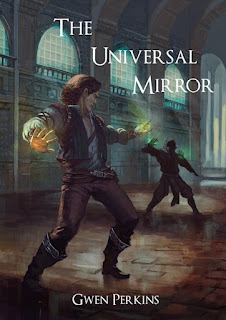 On the island of Cercia, the gods are dead, killed by their followers and replaced with the study of magic. Magicians are forbidden to leave their homeland. Laws bind these men that prevent them from casting spells on the living—whether to harm or to heal.

Quentin, a young nobleman, challenges these laws out of love for his wife. His best friend, Asahel, defies authority at his side, unaware that the search for this lost magic will bring them both to the edge of reason, threatening their very souls. The Universal Mirror shows how far two men are willing to go for the sake of knowledge and what they will destroy to obtain it.


About the Novel.
1 - When did you decide to write The Universal Mirror?
The idea actually came into my head in 2007.  I wrote a chapter of it, I think… actually three and then let it sit for years.  I knew that these men were searching for a way to heal but I didn't yet know their motivations or really have the world set up.  At the time, however, I decided that I wasn't ready to write a novel and focused instead on other writing projects.  The idea and the world started grabbing me, however, and wouldn't let go.  Then just one night, the story unraveled itself in my head and I began working on it in earnest.
2 - How long did it take you to write the story?
Not counting the long gestation period above, I'd say about nine months for the first draft.  Ish.  I learned a lot about plotting during that time.  Real life was also a bit chaotic at that point, as it often is, and while I write daily, some days, it was a challenge to write 25 words.
3 - I read that The Universal Mirror was inspired by some events of the medieval and Renaissance periods.  Which actual events inspired the story?
A number of different events influenced me in the creation of both the novel and Cercia itself, some based in those time periods and others a little later.  The real genesis of Mirror came from reading about the mirror notebooks of Leonardo daVinci and how he studied human bodies (often illegally) in order to create art, which to me is a form of magic.  I was also inspired by the glassblowers of Murano, men who were not allowed to leave their island because the government was worried that they would reveal the secret of their work.
And of course, many of the little details in the novel reflect my interest in history, right down to the names of some of the spices referred to by Asahel (cassia, galingale, etc).  I suspect because I read about history so much and so widely that there are likely connections that even I don't consciously know about!

4 - How the world of Cercia was born? / Did you create Cercia thinking of a real place? Which one?
A little bit of Cercia is based in reality, namely the Puget Sound rainforests that I grew up in.  Other than that, I'd say that Cercia is more a collection of a number of places that I've thought of, visited, or read about.  Its climate is completely based on the Pacific Northwest but not all of the terrain is.  Other regions of the world are more specifically based on historic places—Anjdur, for instance, which is the primary setting of the sequel I'm currently writing, is based somewhat on Constantinople as it existed in 1204.

5 - Are any of the characters inspired by a real person?
Not really as personality goes, to be honest.  I worry about using a real person's likeness in fiction, particularly because my characters aren't perfect.  They make bad decisions and they're not always the best people they can be.  I'd hate for someone to read my book and feel as if I painted them in a bad light.  That said, physical appearance is a little different.  There are a couple of characters that I definitely visualized certain actors speaking when I wrote them.  (It's no real secret that if there ever was a Universal Mirror movie, I would want Wil Wheaton cast as Felix.)

6 - While you were writing, did you ever get to the point of not liking one of the characters? (let's say Quentin)
It's funny that you mention Quentin specifically.  Yes.  I absolutely disliked Quentin at certain points in the book.  I felt that I was taking something of a risk in making him react towards people the way that he does but at the same time, no one is perfect.  If I was in his situation, desperate to find any way to convince my wife that she was as beautiful as I believed her, I might also not always be considerate or react appropriately.  Quentin tries to do what he thinks is the right thing…it's just that sometimes, it's not always for the right reasons.  But haven't we all had a friend like that?
I admit that I haven't gone through this kind of reaction with the other main characters (Asahel, Felix, Catharine) but there's reasons for that .  I can't say too much about it, however, lest I spoil the rest of my series!

7 - If you were a magician like Asahel and Quentin, would you use your magic to help others?
I like to think that I would.  It's a hard choice that they make, however, especially Asahel.  He risks having his own life extinguished if he's caught, after all.  I'm not sure if I'm as moral as he is throughout the book or that I could make some of the tough decisions that he does—however, I'd like to be like him if it came down to it.

8 - What can we expect from the sequel: The Jealousy Glass.?
The Jealousy Glass actually picks off a year after The Universal Mirror leaves off.  It's being written as a standalone book but it still focuses on Asahel and Felix (characters in the first novel).   These two men go to the faraway empire of Anjdur in the hope of preventing a war.  This book is action-packed with everything from shipwrecks to swordfights and even a hint of romance!

1 - What's your favorite place to write?
I like to write curled up on my couch.  I often actually like to draft chapters longhand and polish as I type them in.  I'm not sure exactly why but when I have writer's block, something about the physical movement of writing knocks it right out of me.

2 - I love museums, and because you're a museum curator, I have to ask: Which is your favourite museum in the world?
Oh, that's a hard question!  Because I'm a curator, I see so many of them!

I'm going to say three: the Washington State History Museum, the Museum of Glass, and the Boston Museum of Fine Arts.  I love the History Museum not only because of the stories that they tell but because of the way that they're told.  It's a very tactile building—you can open drawers to discover artifacts, walk into dioramas like a coal mine and a petroglyph-covered cave, and hear sounds all around you in the different exhibits.  I'm actually quite a bad museum-goer in some respects because I like to touch things and hear things rather than simply spend hours gazing at a painting.  J  The History Museum satisfies that need in me.

I love the Museum of Glass mostly for their hot shop.  I could sit for hours (and have) just watching their artists blow glass in front of me.  I actually prefer seeing the team of year-round artists work to the visiting ones, I admit, because it fascinates me how many projects they'll work on and how many different styles.  So far as why I love the Boston Museum of Fine Arts, it’s mainly for the wide variety of art and objects in their collection.  They're very well-displayed and there's a lot to see.

3 - I'm a fan of the Renaissance period, Leonardo Da Vinci, is my favourite artist. Who is your favourite artist of that period?
As you probably noted from above, I love Leonardo and his art was a major inspiration for this book.  I definitely also went through a period where I was fascinated by Bosch.  I don't know that I'd say I like the art exactly but it's fascinating.  A lot of the Baroque painters who followed also draw me in with their use of some of the techniques from this time (Caravaggio and Gentileschi, to name a couple). 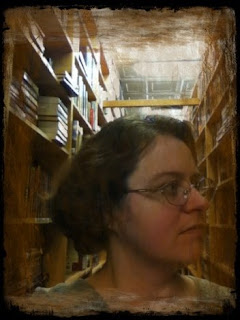 Gwen Perkins is a museum curator with a MA in Military History from Norwich University. She has written for a number of magazines, exhibitions and nonfiction publications. Her interest in history fueled the creation of the world of The Universal Mirror, inspired in part by people and events of the medieval and Renaissance periods. She lives with her partner and three children in Tacoma, WA.

The Universal Mirror is the first novel of the Artifacts of Empire series. Gwen is presently at work on the second volume, entitled The Jealousy Glass.

My Review of THE UNIVERSAL MIRROR:


My rating: 4 of 5 stars
"How do you know if you're doing the right thing?"
That would be the question that Ashael has to deal through the story.
Helping is friend, Quentin, in the quest of a higher power, and breaking the laws all along, he found himself between what's right and what's wrong, not always knowing wich one is what.
In the Island of Cercia the magicians live according to some rules that not always seem fair.
And that fact leads this two men to take some dangerous choices.

All the characters in the book (wich are a few) play an importan part in how the story develops. And every actions has its consecuences. And every choice is a good representation of our human nature and we think is right.

The first thing that got my attention was the cover of the book. That idea of a man fighting a dark shadow (or at least that's how it looks to me). However at the end of the book I gave the cover another meaning, but I don't want to ruin nothing for you.

I can't wait for the sequel of this book.

I hope you enjoyed this blog stop. I know I had fun and it was a great experience.
Happy Reading!
Publicado por RuthB en 1:13 AM 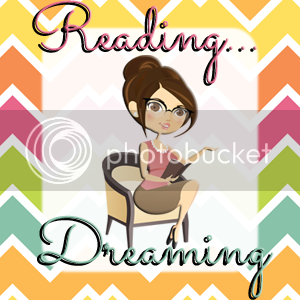