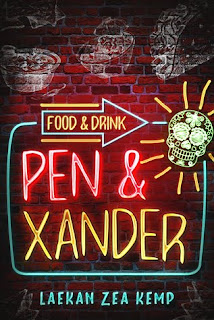 
Pen Prado has a passion for cooking. Specifically, cooking her father's food in her father's restaurant. It's the heart of their immigrant neighborhood, a place where everyone belongs, and second chances are always on the menu. Except for Pen. Despite the fact that there's something almost magic about her food, her father can't imagine anything worse than her following in his footsteps. And when Pen confesses to keeping a secret from her family, he fires her, ensuring she never will.
Xander Amaro is undocumented but that doesn't stop Ignacio Prado from offering him a job at his restaurant. For Xander, it's a chance to make amends and to sever his toxic relationship with the druglord, El Cantil--a man whose been like a father to him since his own disappeared. Soon after, his mother abandoned him too, leaving behind a void that not even his abuelo can fill. Until he meets Pen.
Both seeking a place where they feel like they truly belong, they end up finding each other, and in the face of tremendous fear and self-doubt, they end up finding themselves.

Laekan is a writer and explorer extraordinaire who grew up in the flatlands of West Texas. She graduated from Texas Tech with a BA in Creative Writing and is the author of the multi-cultural New Adult novels The Things They Didn't Bury, Orphans of Paradise, and Breathing Ghosts, as well as the YA Paranormal series, The Girl In Between. Follow her adventures here on Goodreads, on her blog, or on twitter.

Pen is supposed to go to college and be the one that makes it, but she wants to cook and follow her father's steps. However, when she decides to be brave and honest and confess her dreams... well things go wrong and she is left with no job and the chance to start over.

And in the other corner, we have Xander, a boy who grew up without his mother or father, who has been hunted by the fear of being deported because is an undocumented. The shadow of his past and his association with 'El Canti' hunts him and sometimes he thinks that he doesn't deserve a second chance.

Reunited thanks to the restaurant, Pen and Xander will help each other to heal and above all to learn that life is property of each one of us, that destiny is something you have to make. Each one of them has demons of their own, Pen is not as happy as she seems (if you know something about depression and mental health, you will agree she is well described) and Xander well, imagine being abandoned by your father and your mother.

I like that the romance between them is not forced or cheesy. Litlle by little they are brought together and naturally they end up in a place where things cannot go wrong.

The book addresses several social issues, immigration, drug cartels, mental health, violence among other minor topics. The author deals with all of these without making it a political book or a boring story. This is the reality of the characters and I'm sure many will feel related to it.

Overall, I really enjoyed the book. It's well written and it's easy to read. The characters are likable and the story has the perfect amount of romance, adrenaline, fear, and emotions.