Review: Pay For My Sin @IrynaKCombs 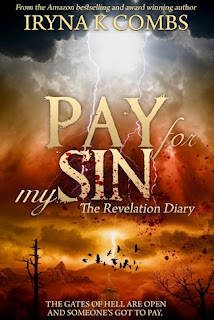 Maria is a Christian woman with one purpose – save her corrupt family from eternal death. As the apocalypse rages around her, she makes an unlikely friendship with one lost soul and the two women flee into the southern wilderness. Forced to take shelter in a long-forgotten church, they fight to survive as all hell breaks loose outside.

Trapped inside a long-foretold prophecy, demonic horse-men and soul-seekers roam the fire-ravaged world haunting and seeking out Maria, who must learn to trust no one. As the angels watch on, will she survive Lucifer’s army of the damned, keep her only friend safe, and repay the debts of sin?

Originally from the Ukraine, Iryna K Combs is still considered as a new face to America. Speaking three languages including English, that became just as natural as her native Russian. She grew up in a town on the south of Ukraine doing the same things other kids her age did. Dreaming, hoping and wishing. Growing up, she spoke absolutely no English and never even saw herself somewhere abroad. Nevertheless, writing a novel in another language! She was simply never interested in literature and was not an avid reader.
Iryna went to the local school that brought mostly negative experience in her life. But it shaped her throughout the years. Her college life was much better. She is a holder of bachelor degree in finances. Iryna also studied some psychology and self-studied body language.
In her first year of college she met her future husband online. When she finally got her fiancée visa, they both moved to the states, where soon after, got married. Iryna traveled to most of the Europe, Egypt, and Bahamas and still wishes to see more countries.
Iryna is an ex-model. In the first few years living in the states she did some modeling and acting. Photo-shoots, run-way and photo in the magazine fulfilled her childhood's dream. A few years later she became a mother of a wonderful and most handsome little boy. Along with learning and experiencing motherhood, Iryna began to make hand-made jewelry and organic soaps. This hobby turned into her small business and became bigger than she thought it would.
In the last year Mrs. Combs discovered: “an author lives inside me”. Never did she think that she would write an English book and that she would love doing it. But she did! And yes, she loved it!
Amazon bestseller in all of its categories “Black Wings” was written by her dream that she saw many months before she actually began writing. The novel was accepted by a romance publisher only two months after she was done writing. Once her book was published, the publisher closed down and Iryna quickly found a new home for her debut. Being released on October 23rd, 2015 her novel rapidly gathered many editorial, professional and customer reviews. Only five months after release “Black Wings” became an amazon bestseller in all of its categories and stayed a bestseller for a week.
Iryna is planning on sequel as she says: “I have so many people asking for sequel that it practically inspired me to write one.” While she is leaving sequel for the end of the year of 2016, she is currently working on her next creation, realistic Biblical fiction.
Combs loves nature, going out with her family, gardening and cooking. She also plans to write her own cook book in the near future. Iryna is working on becoming a certified interpreter in English-Russian. She loves meeting new people and gets shy when given compliments. Combs loves to learn new things and thinks it is good to know everything since we never know what we might have to be doing. Iryna, age 28, is a proud Christian and loves learning more about her religion.

'Pay For My Sin' is about the day all Christians and non-religious people is kind of waiting but fearing to happen. The book jumps right into it, one day Maria has a normal life, next doom day is here and she has to save her family and is left in a devastated living hell.

I have to say that religious books are not my thing but somehow I enjoyed this book. Maria is left to face something she doesn't deserve and you feel bad for her, especially when she knows what's coming. You end up cheering for her every time she overcomes a new challenge. I like her and admire her faith.

The book has biblical quotes and it's based on what the Bible anticipates will happen in the final days. You don't need to know much about the bible or be a Christian yourself, the author explains what to expect and it's easy to follow the story. In the end, it's fiction and if you leave your personal beliefs aside you will enjoy a well-written book.

I have to say that the morbid in me who enjoys reading bloody scenes was happy about some graphics and violent moments in the book. Maria has to witness a devastated world where all humanity has left the building and people has gone mad.

Overall, I enjoyed it and it was easy to read. It only took me a day to read it.