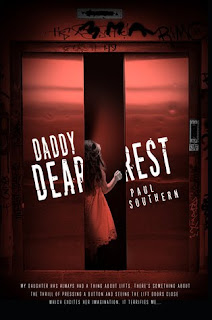 
An estranged father’s weekend with his beloved five-year-old daughter turns into a nightmare when she gets into the lift of a city centre tower block and goes down without him. She vanishes without a trace. It sets off a race against time, and a nationwide manhunt, to find her. As the police investigation closes in, suspicion falls on those closest to her - with devastating consequences. Daddy Dearest is a terrifying story of love, obsession and psychological meltdown.'My daughter has always had a thing about lifts. There’s something about the thrill of pressing a button and seeing the lift doors close which excites her imagination. It terrifies me. Every time she walks in, I imagine it’s the last time I’ll see her. What if she hits the button before I get there? What if the lift doors close and I can’t get her out? It drives me nuts. There are eight floors in the Sears building, nine if you count the basement, and the lift is fast: more like a fairground ride, really. It does top to bottom in twelve seconds. I’ve timed it. Taking the stairs, I’ve done it in forty-two. That leaves a gap of thirty seconds. You’d be surprised what can happen in that time. I was.'

Following an induced labour some time in the 1960s (due date: Halloween night), I had my subscription to a normal life revoked by itinerant parents, who moved from city to city. Lived in Liverpool, Belfast, London and Leeds, then escaped to university, where I nearly died of a brain haemorrhage. After an unexpected recovery, formed an underground indie group (Sexus). Met the lead singer through standing on a bee. Made immediate plans to become rich and famous, but ended up in Manchester. Shared a house with mice, cockroaches, and slugs; shared the street with criminals. Five years later, hit the big time with a Warners record deal. Concerts at Shepherd’s Bush Empire, Melody Maker front cover, Smash Hits Single of the Week, Radio 1 and EastEnders. Mixed with the reallyrich and famous. Then mixed with lawyers. Ended up back in Manchester, broke. Got a PhD in English (I am the world's leading authority on Tennyson's stage plays), then wrote my first novel, The Craze, based on my experiences of the Muslim community. Immediately nominated to the Arena X Club (the name Arena magazine gave to a select group of creative, UK-based men responsible for shaping the way their readers lived and enjoyed their lives). Wrote a second book, Brown Boys in Chocolate, which predicted the London bombings. Fell foul of the censors and subsequently gagged by the press. Got ITV interested in a story on honour killings and inter-racial marriages and was commissioned to write a screenplay (Pariah) based on my life story. ITV balked at the content. Subsequently, trod the Wasteland before finding the grail again: a book deal with children's publisher, Chicken House.Killing Sound, a YA horror set on the London Underground, was published by them in September 2014. The book, originally written for older teens (16+) and adults, was censoriously edited by the publishers to fit a much younger demographic, and inevitably failed to reach either market; the grail proved elusive and I returned to writing something it was impossible to dilute. Daddy Dearest, a dark, psychological thriller, will be released in 2016.

Wow, if I had to describe the book in just one word I would say: FASCINATING!
¨Daddy Dearest¨ felt like watching a movie, a very good suspense film where every new chapter brought a different surprise. You keep reading and reading, waiting for the outcome and you never see what´s coming.

Paul wrote an excellent book where every detail of the plot is well thought. The father´s personality is solid and believable and you get into his head to discovered an underworld beneath the real world. Every character provides something to the story and each one has a past, which makes it more complete.

I don´t want to say much about the story because I would be ruining it for you. If psychological thriller is something you enjoy, you MUST read this book.