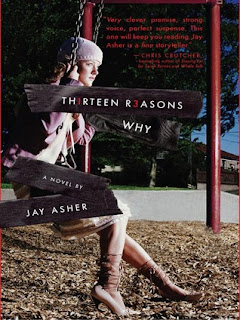 
You can’t stop the future. You can’t rewind the past.The only way to learn the secret . . . is to press play.
Clay Jensen returns home from school to find a strange package with his name on it lying on his porch. Inside he discovers several cassette tapes recorded by Hannah Baker–his classmate and crush–who committed suicide two weeks earlier. Hannah’s voice tells him that there are thirteen reasons why she decided to end her life. Clay is one of them. If he listens, he’ll find out why.
Clay spends the night crisscrossing his town with Hannah as his guide. He becomes a firsthand witness to Hannah’s pain, and as he follows Hannah’s recorded words throughout his town, what he discovers changes his life forever.

Jay Asher was born in Arcadia, California on September 30, 1975. He grew up in a family that encouraged all of his interests, from playing the guitar to his writing. He attended Cuesta College right after graduating from high school. It was here where he wrote his first two children’s books for a class called Children’s Literature Appreciation. At this point in his life, he had decided he wanted to become an elementary school teacher. He then transferred to California Polytechnic State University in San Luis Obispo where he left his senior year in order to pursue his career as a serious writer. Throughout his life he worked in various establishments, including as a salesman in a shoe store and in libraries and bookstores. Many of his work experiences had an impact on some aspect of his writing.

Jay Asher‘s debut YA novel, Thirteen Reasons Why, is a #1 New York Times and USA Today bestseller. In 2017, it was released as a Netflix original series. His second YA novel, The Future of Us, was co-authored with Printz-honor winner Carolyn Mackler. His third YA novel, What Light, was released in 2016. And his first graphic novel, Piper, will be released on Halloween in 2017. His books are published in 40 languages.

Yes, I know I should have read this book ages ago, it has been on my TBR list since I joined Goodreads but of course, I had to read the book before seeing the TV show. I don´t know why I did it but I thought it was part of the experience.

I only knew what the blurb says because I was lucky enough of missing all the hype so I didn´t get to read many spoilers. So, I joined Clay in his listening without expecting anything. I won´t say much about what the book is about because I´m sure you already know.

So, the story, in general, is good, solid and well-thought. I was connecting the dots while reading to see how each character was related. Clay is a great main leader, he is mature enough to handle the revelations he hears and to follow Hanna´s last desire.

I read it quick fast because it´s a light book and easy to read.