Sometimes the strings that tie us down are the same strings that set us free. Sixteen-year-old Pia has always lived in a mysterious facility where mechanical strings control her existence. She plays apprentice to her father, Gio, in performing nanotech designs for the Company, and she soon suspects there are diabolical human forces behind the manufactured reality of her world. Though her childhood memories and the origins of the strings remain strangely elusive, she begins to find solace with the introduction of two unlikely friends: daring, irrational Sofia, and calm, tender Marco. As the truths of the past and present unravel together, Pia must find a way to free herself from her strings and escape the facility before facing the wrath of the unstable head of security, Mr. Davis. But to gain her freedom, she must navigate the dangers posed by Davis and by her suspicious new friends to find the real identity of the puppeteer. If Pia can succeed in revealing the secrets of the Company, she may very well find the independence she so desperately seeks. But in her controlled world nothing is as it seems, and the closer she gets to the truth, the graver the consequences. 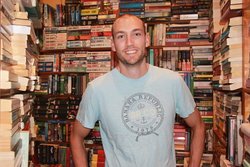 David Estes is the author of more than 20 science fiction and fantasy novels that have received hundreds of thousands of downloads worldwide, including The Moon Dwellers, Fire Country, Slip, Brew, and his new SciFi Pinocchio retelling, Strings. He lives in Hawaii with his inspiring Aussie wife, Adele, rambunctious son, Beau, and naughty cat, Bailey. When he's not writing, you'll likely find him at the beach swimming, snorkeling, or reading under an umbrella.

Set in a dystopian world, 'Strings' is a re-telling of the classic Pinocchio. Pia lives confined in a mysterious place with his father, forced to work with nanotechnology and attached to strings. She can't remember most of her childhood until one night memories start to flow back into her head and she starts to plot plans to free herself and her father.

The strings are so relevant that could be considered a character. They have a mind of their own and control every move she and her father do. It was hard to picture how a person could move around with 15 strings controlling each inch of her body but after a while it becomes easy.

Pia is the classical sixteen-year-old girl from any YA book. She is ready to put her life at risk, the family is her first priority and has all the traits of a typical heroin. She has a strong bond with his father and Fig (a sweet robot) and tends to make rushed decisions. For some reasons, I wasn't a fan of her all the time. Maybe I'm tired of teenagers with "I'm the only one who can save the world" complex. But of course, she is the only one who can save the world ;)
Now, Marco and Sofia are the friends that the story introduces to help Pia solve the puzzle that is her life. Marco is a likable character, a bit cryptic but handsome, so he is ok. Sofia brings color and "freedom" but she also has some secrets.

This is a retelling and it takes many ingredients from the classic story. For example, she has a tiny companion (instead of a Jiminy Cricket) and instead of a growing nose, she has to deal with a strange skin rash whenever she lies. These were good elements of the story and they are easy to identify. Fans of the original story will discover an original story that evokes the classical without copying it.

Now, let's talk about the things I didn't like. The romance, for example, is sweet and innocent for their age but for moments it had the intensity of a mature relationship which wasn't very believable. Then, there is the dystopian element. We only know that the story is set in a dystopian future because she says it on a line but we don't know nothing about the outside world which is understandable given the circumstances but... if someone would have told that the story takes place in our days I could have believed it, the technology used was quite imaginable.

My biggest problem was the "bad guy". I won't say who the evil character is (no spoilers here) but let me tell that his-her reasons why he-she is doing what it's doing were ridiculous, at least for me. The whole "daddy issues" and the rest of his-her arguments got me asking me things like Really? - Are you serious? - Move on already..."

Anyway, I'm sure many YA fans will love it but it wasn't my favorite book.