Happy Saturday!
I finally ended my review of this book. I had the pleasure of receiving it from the author who kindly sent it to me. Stay tune for the blog tour of THE WAKING DREAM and for more surprises.
*****

THE WAKING DREAM
by Jennifer Ford. 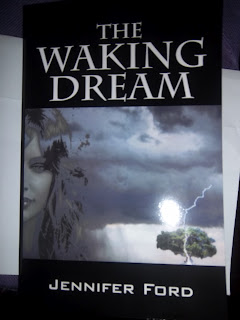 Book Description:
Cut off from the outside world by a hostile desert full of savage secrets, the city of Illamar must fend for itself. Late one night, Dante Montero, Commander and Ruler of Illamar, is confronted on his own streets by a mysterious woman bearing an ominous message from a dangerous man known only as Rasheim.
Dante and his close friend Kerran, Captain of the Guard, rush to discover the identity of Rasheim and the nature of the threat posed against their city. The closer they get to the truth, the more their worlds begin to fall apart. Both men will have to rely heavily on their friendship as they struggle to comprehend the events happening around them, their past, and even the truth about themselves.
They must move quickly and choose wisely, for time is running out as Dante and Kerran discover a secret plot is already underway to destroy their city and kill every last person alive. It seems the answers they so desperately need can only be found in a sequence of dreams, but in a world where nothing is as it seems, even their dreams could turn out to be deadly.

If you never read a fantasy novel The Waking Dream would be a great way to start and I can assure you that you won’t regret it. I had my doubts about it but I’m so glad I read it and I can honestly say that it’s a great book.

A novel set in a savage desert between the cities of Illamar and Rheamyre, where we meet Dante and Kerran, two great friends that are forced to face an unknown threat. We discovered the story little by little, because of the narrative skills of Jennifer, and we are able to feel every emotion that Dante and his friend share trying to understand everything that comes in front of them.

A story full of secrets, a forgotten past, roles to play, prophecies and well developed characters that never lacks intensity and mystery. The fights and encounters between characters are easy to read as well as entertaining.

Something worth noting is the intensity of the relationship between Kerran and Ke’arhra. The bond between them is one of the best things in the book. I love to read about his desire for her and how she has to deal with something new and that scare her so much.

There’s so much talk about the enemy that at some point I just wanted them to go and face it once and for all. There’s so much preparation needed and untold things that only added more excitement to the story.

Jennifer has a very descriptive writing that allowed us to really picture every landscaping, which is not an easy task when you are creating a fantasy world. And she truly succeeded in translate all that what was in her imagination to paper.

The only thing that bothers me a little is that the final fight felt very short and in my opinion could be a bit longer. Maybe I just wanted more sword action.

The end… What a cliffhanger, now I’ll be waiting to know what happens next until the release of the second book.

There’s a lot to say about the book but I’ll let you decide your thoughts about it.