Yield is the first novel of Bryan K. Johnson and as part of the promo he has kindly offered me an interview! Yield will be released Tomorrow (AUGUST 14TH).
Check out the amazing description, the great interview and... you can watch the trailers at the end of this post!  It really looks like a good read :)

Ex-fire chief Devin Bane rises above the thick clouds for an interview in Seattle and the promise of a better life. Packing up his carry-on items for their descent into the city, Devin is blinded by a distant flash, followed by the screams and chaos of a crash landing.
Outside the plane's wreckage, a nightmare surrounds him. Seattle's iconic skyline is gone.
Searching for answers as he flees through the ruins, Devin and a handful of survivors are surrounded by the most primitive side of human nature. Plunged into the darkness of a broken society, their tattered souls are each tested by the horrors they face. Even if Devin can escape the city, a far worse danger now blocks his path back home . . . back to his family and the dawning of a changed world.

Bryan K. Johnson graduated from the University of Liverpool with an MBA in Marketing, and also holds undergraduate degrees in Advertising and Graphic Design. He's worked as a Creative Director within the television industry for over a decade, winning several Emmy, Addy, and Telly Awards throughout his career. He currently lives in Oregon with his wife and two children. Yield is his first novel, and book one of the Armageddia Series.

Me: I read that a flight from Tucson to Bend inspired you to write Yield, were you inspired by something else?
Bryan: Working in the media, I'm exposed daily to the headlines of rising global tensions and conflict more often than most. The idea of a world war in the nuclear age just seemed so scary and possible that I felt compelled to write about it. At the time I started Yield, America was invoolved in multiple wars on multiple fronts, seeming to have enemies every which way we turned. I didn't want my novel to be too political, but I just started to wonder what would happen if other countries, decided to launch their own preemptice strikes, as we had done fearing America' safety. I thought that descent from the relative normality of today into dark and savage new world would make for an absolutely riveting story.

Me: Was it easy to imagine an apocalyptical world?
B: Pieces of it were. I'm a very visual person. I love drawing, painting, and have twelve-plus years of experience inside the television industry directing and producing. That visual sense I think translates into my writing. I'm able to see the details of my scenes and characters very clearly, even a chaotic and apocalyptic world like Yield's. I try to set up each chapter and scene for my readers as a director would, with establishing shots, cutaways, and intense action sequences. That creative background gets channeled when I write in sometimes very interesting ways.


Below is a digital sketch I did on my iPad of the devastated Seattle horizon. I also sketched out some of Yield's main characters before writing, which helped me get a better feel for them. You can check all of those out at: http://www.armageddia.com/Artwork.html 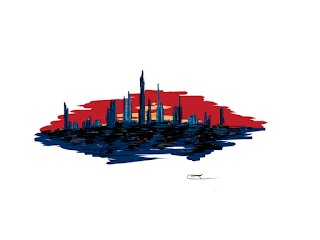 Me: While you were writing, did you ever find yourself stuck?
B: I think everyone gets stuck from time to time. Some days the words are flowing and it's all I can do to keep up with them. Other days, they can't be beaten out of me with a sledge hammer. If I'm stumped, I'll jump to a different part of the story or take a step back and try to look from a more macro perspective. Is it a local issue or is there a broader plot, character, or flow problem that needs addressing? Looking a page or two ahead of where I'm blocked and working down from there I also find helpful because it reorients me back to the broader story and helps to show the problem area in context.

Me: Did you use any real situation or real fact as a guide in your book?

B: I integrated some contemporary news headlines into the narrative to give it a greater sense of relevance and realism. Aside from that, I really wanted to take the story down a very personal and dramatic road—one that was uniquely gripping and terrifyingly real. Everything is just a step or two past where we are now. I love science fiction and fantasy, but didn't want Yield to have that fantastical and unbelievable quality to it. I wanted the story to feel horrifyingly possible in every way.

Me: What would you do if you have to face a situation like the one in your book?
B: That's a great question! I honestly don't know. No one really can until they're thrown into such a life-threatening and chaotic scenario. We'd all like to think that we would be the heroic ones, helping others and holding fast to our morals. One of the most honest and interesting aspects of Yield I feel is the struggle of internal demons and doubt inside all of the story's characters. Heroism comes at a cost, either to yourself or those you care about. Yield's very flawed and sometimes unwilling protagonist, Devin Bane, runs up against that time and time again, trying to come to grips with his own instincts to protect and care for those around him, but also knowing that his own family may be suffering and in desperate need miles away. That is such a difficult choice to make, but a very real one with irreversible implications either way.

Me: It took six years for Yield to be released, what were your feelings during that long process? Did you ever think about giving up?
B: I was just starting to get over that! Thanks for bringing it up. . . Really.
Six years is a long time, and I honestly did think about giving up a few times along the way. I thought the concept made for a very visual type of story, so I initially fleshed out Yield in a screenplay format. That alone took me a couple of years because I was working on it after long days at work and time with my family. Putting it together as a screenplay actually helped me quite a bit while writing to better visualize the scenes, structure the story, and tighten up my dialogue. But screenplays have to be so concise and heavily formatted that it really limited the emotion of the story. I received a lot of feedback from prospective agents and production companies that the screenplay was overwritten and just too literary. So I took a deep breath and jumped in with both feet to expand Yield out into a novel. It took a few more years, but was extremely liberating to be able to flesh out how my characters felt and thought—how the fear inside them was palpable and crippling. It allowed me to explore my own style of writing and create a much deeper story.
Because of that multi-formatted process and my own inexperience as a novelist, it took four times as long to finish the story as it probably should have. Every time I read it I also found different things I just had to rework. I would change my changes, then change them back. I was really bipolar at times. I'm a perfectionist, so I was never completely satisfied. Eventually I just had to push it all away and say the book was done—for my own sanity, if nothing else. Then, of course after I read the printed ARC, I had 80+ more changes for my publisher!

Looking back, though, editing is really where my story and writing found its voice. I am grateful now for the extra time I spent on Yield. As a new writer, it can be intimidating because it sometimes feels like the story will never truly be done. But after six years, I'm proof that with a little determination and tenacity, that cover can be closed.

Me: Did you know from the start that you wanted to write a series?B: From page one, I knew that the Armageddia story would stretch across at least three parts. To do it right, I knew it had to depict the epic journey and transformation of not only the characters, but also our country and world. There was just no way the story could fit into a single installment. Books two and three of the Armageddia Series should be released in 2014 and 2016, respectively.

Me: You are already working on the sequel. How is that going?
B: It's going great, I just wish there were more hours in the day to work on it! I love the direction book two of the Armageddia Series is going. I feel like I learned a lot while writing Yield, and that's helped my process on book two tremendously. The follow-up to Yield explores a darkening world, one filled with revenge, retribution, and a desperate struggle to find hope within the chaos. Book one saw a cataclysmic shift away from everything we've ever known. It was very sudden and immediate in the lives of the characters. Book two of the Armageddia Series takes place a year later, and is more about the sustained struggle to survive—and how the characters have changed in very different ways to do just that.

Me: What would you say to those who want to read Yield?
B: At its core, I would say that Yield is a journey of self-destruction and redemption. When our country's entire infrastructure is crippled by a brutal attack, the survivors are thrown into an unthinkable world full of chaos and anarchy. We're thrust right into the middle of that madness with the characters, without understanding what happened or why.
Yield is a story about that shift between the life we know and the very dark world that emerges from the ashes. If everything you knew suddenly changed in a flash of hatred and violence, how would you react? What would you be capable of to protect the ones you love? Yield's characters come face to face with those extremes of humanity, trying to overcome their own savagery and demons while fighting to survive.
My goal as I wrote Yield was just to depict our current geopolitical environment and threats in as realistic and unbiased a way as possible, letting the reader draw from it what they will. I wanted my story to feel terrifyingly possible in every way, without focusing too heavily on any particular religious or political viewpoint. I incorporated a very diverse set of characters to help show that beyond the racism and bigotry, beyond the differences of religion and background, we are far more alike than different. It isn't until our characters are pushed to the brink that they realize that.


You can follow Bryan K. Johnson and the entire Armageddia Series, including Yield which will be released on August 14th, at:
www.armageddia.com
www.facebook.com/armageddia
www.twitter.com/armageddia